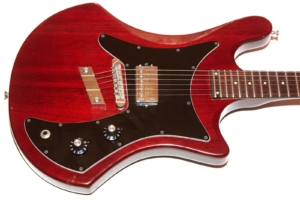 Here we have another New Guild Shapeguitar from the late 1970s called an S-60.  I had wanted a Guild S-60 for some time and the only one I’d found was listed at $1200 which is hundreds more than I paid for my S300. This one popped up on eBay with some not-so-great pictures and a less-than-stellar description with an nice opening bid. Since I was the only one who bid I got it for a great price!

The S-60 is the entry-level into the Guild electric guitars of the era and if you’ve read my other reviews you’ll know that I have a thing for high-end Guilds, but as you’ll read I have a soft spot for these guitars as well. Let’s take a look and see if this 1977 Guild S-60 holds up to my fond memories.