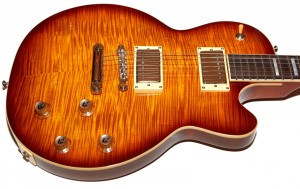 Today’s review is of a Guild Newark Street (NS) Bluesbird from 2016. This is one of the current crop of Guild Newark Street guitars, all of which are surprisingly great instruments. After reviewing a Newark Street X-175B and then a Newark Street S100 Polara, and comparing it to a 1997 reissue S100, I had many people request that I review the NS BluesBird, so I found a new one on Reverb for a price I was willing to pay and ran it through its paces. Let’s see how it fared.