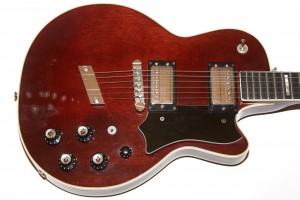 After recently reviewing a 1997 Guild Bluesbird and a 2016 Guild Bluesbird, I decided that I’d like to try one of the earlier 1970s models and searched around until I found this 1974 M-75 CS model on Reverb for a great price. In fact, it was a really great price likely due to the finish damage and wear obvious in the photos. Even though it’s got some warts, the guitar is structurally and electrically sound, which means that it plays and sounds great, even if it’s not up to my normal standards of near-mint guitars.

In honor of this guitars long and less-than-pristene past, I opted to photograph it right as it came from the box in all its dusty, dirty, and finish-marred glory. Let’s see how it fares given my normal desire for bright and shiny instruments.