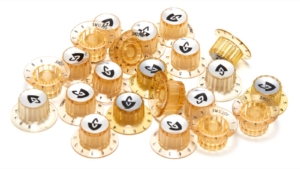 After buying some clear Guild knobs on Ebay and doubting their veracity, I realized that there was no way to determine if they were accurate. I decided to do what any detail-obsessed nerd with a macro lens and stupidly powerful studio lights would do: I figured out the differences, photographed each, and wrote this article so that others might know the the subtleties between four eras of clear Guild G-shield knobs. 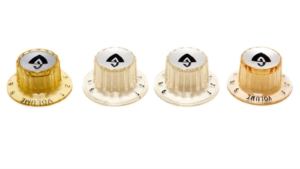 Guild has shipped many styles of knobs on their guitars over the years, many which are covered in Hans Moust’s excellent tome, The Guild Guitar Book (page 35). As great as Hans’ book is, it only goes up to 1977 and so didn’t help me all that much with this particular predicament.

Since I often restore Guilds, I’ve ended up with a collection of various parts in order to do so including the pile of clear knobs that you see at the top of this page. But are they all the same? If not, how many different types are there? I started by sorting my pile into obvious differences and then compared them to pictures of guitars in my collection that I know to have original parts.

What I discovered was three main differences that I’ve split into four different categories to more closely line up with the commonly seen Guild factories that produced them. Let’s take a look at them in chronological order. 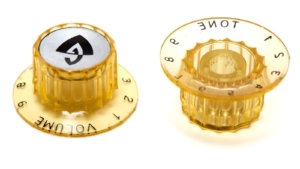 These knobs are from a Hoboken guitar, but they were likely also used in the early days of Westerly.

The numbers are very slightly embossed into the underside of the skirt and the depth of the impression is filled with black. The font used on these knobs is distinctive in that it’s slightly larger and has a thinner weight than all the other knobs on this page and the knobs tend to be very amber in color due to their age. This example is from 1966, so they had been gracefully aging for 52 years when this picture was taken. 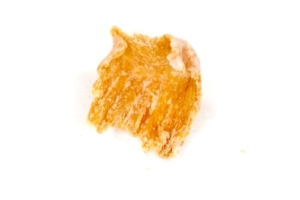 Many of the ’60s knobs I’ve encountered appear to have something stuffed into them to help them fit snugly onto the pot shaft. This seems to be a small piece of thin cloth, sort of like the wadding used on muzzle-loading rifles. This picture is one of the wads (for lack of a better word) that I carefully removed from a Hoboken clear G-shield knob. If you look into the knob and it looks like its filled with something nasty, it may just be a bit of this material, whatever it actually is. 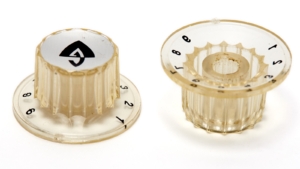 These knobs from a late-90s Blues-90 have no Volume or Tone labels on them, but still only go from 1-9. It’s my guess that the words were removed in the mid-90s during the Westerly days because Fender bought Guild around then and removing the text would have been a way to simplify and thereby increase production since every knob would now be the same.

These knobs also have a rim around the bottom of the skirt that the ’60s and Newark St. knobs don’t seem to have. This rim forms a visible ring around the skirt that, in addition to the lack of the Volume/Tone labels, makes for an easy way to identify that these are Westerly knobs, though as we’ll see, the Corona knobs are pretty much identical. The numbers are printed in black on the underside of the skirt and do not seem to be raised or embossed. The ink can be scraped off, though this would be difficult without removing the knobs from the guitar. 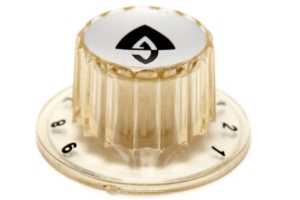 These knobs often have a bit of plastic flash on the skirt, usually in the space without any printing. If you’ve never built model cars or work in the plastic industry, flash is the bit of plastic that’s left over from the mold that should have been trimmed off and wasn’t. For me, this bit of flash looks terrible and greatly cheapens the look of these knobs, though I’ll be honest and say that I never noticed it before I took the macro lens to my pile of knobs, so it’s not anything to get too worked up about. It may, however, be another way that you may determine if the knobs are period correct. Since flash may or may not be present, the other traits listed here are more useful.

These knobs are the clearest of the bunch. Though they’re not 50+ years old, the ones in my possession are from the mid-late ’90s which makes them almost 25 so I’d imagine that they probably won’t change much more than they already have. 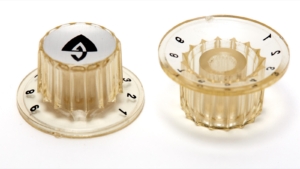 On the Corona guitars that I have with these knobs (X160 Rockabilly, Fender Custom Shop Bluesbird-90, Bluesbird Goldtop), they appear to be identical to the late-90s Westerly knobs.

The numbers are printed in black on the underside of the skirt and are not raised or embossed. The ink can be scraped off, though this would be difficult without removing the knobs from the guitar.

These knobs have the same bit of flash on them, the same rim around the skirt, the same lack of Volume/Tone labels and appear to be the same as the Westerly knobs in every way. 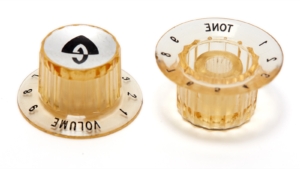 The numbers on Newark St. knobs are embossed into the top of the skirt and the depth of the embossed numbers is filled with black. These are the only knobs out of the ones seen on this page where you can feel the numbers on the top of the skirt. If you can’t feel them with your finger, try running the edge of your fingernail and you may feel the slight indentations that form the shapes of the numbers. This is perhaps the simplest way to tell if the knobs in your possession are vintage or modern imports.

These knobs are similar in color to the Hoboken knobs, but they’re only a year old (if that) so they’ve been colored this way from the factory as opposed to having aged over time.

These knobs have a more modern font than the Hoboken knobs with a more bold appearance, though without them side by side the difference can be hard to discern. The main difference to look for is the fact that the numbers and letters are imprinted in the top of the skirt.

The silver G-shield on the top of the knob appears to be closer to the rim on these knobs than it does on the others, though again that’s a difference that might be tough to notice without viewing them next to vintage knobs. See the next image for an example.

But Do They Fit? 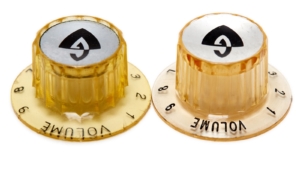 Here’s the big question: Are all of these knobs interchangeable? At first I thought the answer was yes, but I’ve since determined that this is not the case. As with everything in life, it’s not that simple, though. Let’s see why.

There are usually only a couple of things to worry about with guitar knobs. We need knobs to match the shaft which is usually either split or smooth since smooth shafts requires a set screw while split shaft knobs do not.

Next, we generally ask if the pots are imperial or metric because import guitars usually come with metric parts while US-made guitars, especially of the vintage variety, came with imperial parts. This is where it all gets not-so-simple because there’s one more aspect of potentiometer shafts that we should be concerned with, but in all my years I’ve never heard anyone mention it until recently on the LetsTalkGuild forum. That topic is splines. If you don’t know what splines are, consider them kind of like the teeth on a gear. They are indentations down the shaft in which a matching pattern in the hole on the bottom of the knob interlocks to make them stay on and not slip when turned. Split-shaft pots have another defining characteristic, and that’s the number of splines on the split part of the shaft. 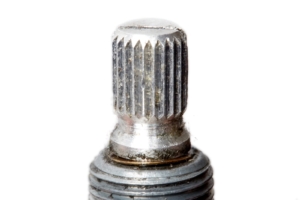 Most of the pots I’ve ever seen from US-made guitars have ten splines on each side of the split shaft. This arrangement is generally called fine spline. This picture is of a pot from a wiring harness out of a 1990s Guild electric guitar and shows the commonly seen fine spline configuration. The Hoboken, Westerly, and Corona clear knobs will fit perfectly on this shaft. Oh, and if you’re grossed out by tiny bits of detritus, dust, and who-knows-what else that you see on these close ups, do yourself a favor and don’t ever buy a macro lens. 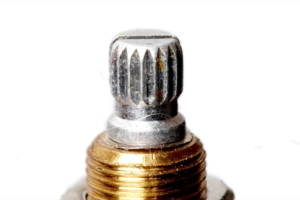 Most import pots, on the other hand, have only eight splines on each side of the split shaft in a formation that is commonly called coarse spline. As you can see looking at this picture, there is really quite a difference between the two designs. The only knobs shown on this page that will properly fit this coarse spline shaft are the Korean Newark St. knobs.

Can you mash the coarse-spline Newark St. knobs onto the fine-spline US-made pots on your vintage Guild? Probably, but you’ll find that it’s really hard to get them on there (and even more difficult to get them off), and they may not sit quite right, but since Newark St. knobs are $10 a pair vs. the ridiculous price people get for vintage knobs on Ebay, does it really matter? It will if you crush the split shaft together so that vintage knobs will no longer fit. You may also crack the new knob.

By the way, here is a pic of all four of the knobs with their matching splines that will get crushed if you use the wrong knob. 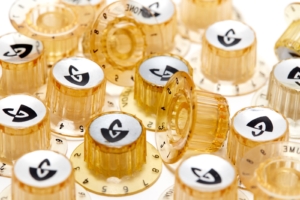 Hopefully that’s more information than you ever thought you’d need pertaining to Guild clear G-shield knobs. As usual, I didn’t think there would be so much detail when I started this project almost 1700 words ago.