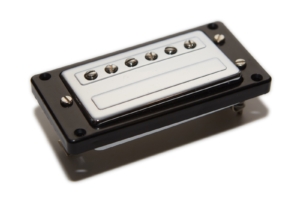 When Guild reissued the iconic HB1 pickup, they made them look exactly like the vintage models. They’re supposed to be made exactly the same way in order to get the same sound, too, but the jury is still out on that. The problem is that since they look very similar, I’ve been afraid that someone would use that fact to try and pass of new ones as vintage. Why? Because a vintage pair of HB1s can sell for $300 or more and the Newark Street HB1s are less than half that new (and even less on the used market).

Well, I’m sorry to say that it’s happened. Let’s look at how I immediately spotted these as fakes and how you can too. 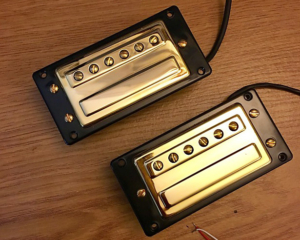 I stumbled across a for sale listing for a pair of New Old Stock (NOS) vintage guild HB1s. The price for these pickups was $495 + $12 shipping with a “Make Offer” option. They were then relisted for $395 after the first buyer returned them. I know because the first buyer contacted me asking about their veracity.

These pickups are absolutely not vintage. Someone had taken modern Korean-made HB1 pickups and was passing them off as rare (and pricey) vintage pickups. The problem is that unless you’ve spent as much time as me looking at vintage Guild HB1s, you’d never know the difference. Let’s look at why these are fake, because the fronts sure look convincing. 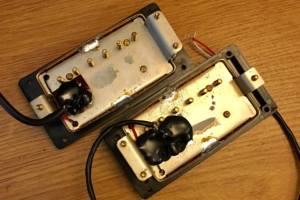 Looking at the backs of these pickups, the first thing that stands out is the blob of black goo over the terminals. That black goo is commonly used by amp and pedal designers to hide something, usually some sort of circuit that they don’t want copy-cats to replicate. Alexander Dumble was famous for covering parts of his amps so that he could maintain his throne of… Dumbleness, I guess. Black goo is not found on vintage HB1s (or any vintage pickup that I’m aware of), and you should immediately ask yourself what its hiding. In this case, it’s hiding the very modern-looking solder terminals that are different than the ones on vintage HB1s, though as we’ll learn it’s not quite that simple. 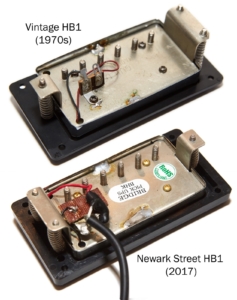 Now let’s look at some unmollested examples of both. The vintage HB1 from the 1970s (top) shows the vintage style board attached at a 90-degree (perpendicular) angle to the back plate. There are no stickers on the back plate, and the words GUILD Made in USA are stamped into the plate. The baseplate attachment screws are all silver in color. The solder has an aged patina to it, probably due to age and the inclusion of lead in the formula.

The Newark Street HB1 pickup is the same size and shape and appears the same from the front (though the adjustment screw-heads are slightly different), but from the back the differences are obvious. The solder board is attached at an angle, the board is of a different material, and there is a small but of insulation covering one of the terminals. The back-plate attachment screw heads are gold in color. Newark Street (NS) Guild HB1 pickups all have RoHS Compliant stickers and a label that states what it is. In this case, that label says “Bridge Pickups BHK”. BHK is the name of the factory (Booheung Precision Machinery in Korea) where pickups for many brands are made. The solder is shiny on NS pickups because it is lead-free which is part of what RoHS promises.

Let’s look again at those pickups from the ad. These pickups have goo over the boards, but the boards are clearly sitting at an angle. They have the same black wire connected, though admittedly that could be added at any time. The plate attachment screw-heads are gold. The pole screws are gold because these appear to be gold-plated pickups, which is fine. The back-plates clearly show where two stickers have been removed from the cheap plating that’s done on the NS pickups. Lastly, there is no GUILD Made in USA stamp. In short, these appear to be Newark Street pickups being passed off as vintage.

But it’s not that simple. At first I thought someone had deliberately covered up the terminals with goo in an effort to hide the truth, but the truth is even weirder because the black goo is actually original! 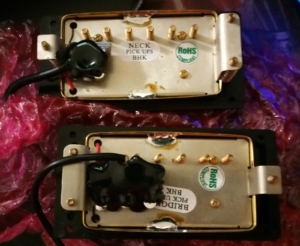 Around 2014 Guild released the GSR X500D Stuart guitar which included new versions of the Guild HB1 pickups that we in the Guild community had never seen before. They were early versions of the current Newark Street HB1s that guild called Guild Anti-Hum Dual Coil full-sized HB-1s that looked like the picture to the right. Look familiar? The sticker positions even match the marks on the baseplates. It looks to me like those “vintage” HB1s maybe have a vintage of 2014.

Thanks to SFIV1967 and Default over on LetsTalkGuild for the detailed history lesson and the photo of the GSR pickups.

I can’t say if the seller is engaged in shenanigans or if they bought a guitar that supposedly had vintage pickups in it, or maybe they just don’t know what the word vintage really means, but either way, these are an example of modern pickups being passed off as vintage. Caveat Emptor!