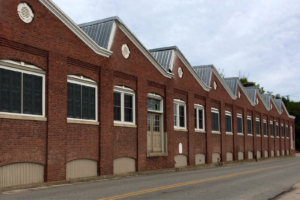 I think we as guitarists tend to think of guitar factories as glorious magical places where our favorite instruments are born. Reality paints a different picture, however, because guitars aren’t born. Guitars are made, and they’re made in factories.

A random question on a forum made me wonder what the history of Guild factories looks like so I spent far too much time trying to track down addresses and current pictures of the current and past factories where Guild guitars were  made. This article is the result of that research. 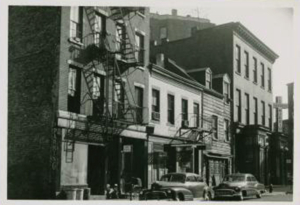 According to Hans’ book, the first factory for Guild guitars was located at 536 Pearl Street in Manhattan, right next to Foley Square. Sadly, such an address no longer exists and Google Maps delivers a generic location on the edge of Pearl Street adjacent to Foley Square for reasons that will readily become apparent. Hint – it has to do with neighborhoods being torn down in favor of skyscrapers. Foley Square has some very interesting history that has nothing to do with Guild guitars, but we’ll get to that in a bit. 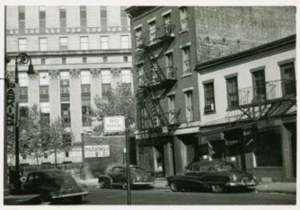 From the information I could gather, these pictures are as close as I could come to pics of the building where Guild’s first factory resided, though I couldn’t manage to match the exact address. These black and white photos are from the NY Public Library Digital Collections site (link).

Entering the address into Google Maps and spending more time than I care to admit, I finally discovered these old pics of Pearl Street behind the court house which still stands today. The addresses listed on the photos show roughly 460-470 Pearl Street, so they don’t match precisely, but they give an idea of what the street was like back when cars looked like that. 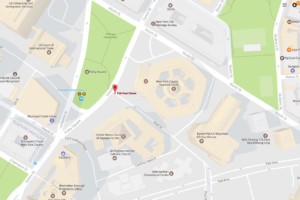 In the late 1980s and early 1990s, the last remnants of those buildings were torn down and replaced with a series of buildings all having something to do with law enforcement. I’m not sure when the building in question was demolished, but seeing as how there are now skyscrapers on the spot, the new courthouse having the address of 500 Pearl Street, it’s pretty clear that it was.

Progress, and all that. 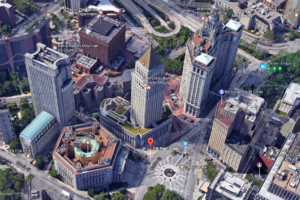 As a bit of trivia, The Daniel Patrick Moynihan United States Courthouse (the one with the address of 500) was begun in 1991 and by 1994 the $1 billion courthouse and office complex was making news in typical NYC fashion. Here is a cool video about the area: (link) and here is another nice article: (link).

Sorry for the detour. I just wanted to learn about old Guild factory locations and fell down the rabbit hole of NYC history. 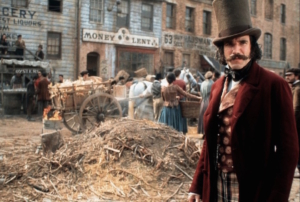 One final word on the subject. If you’ve ever watched the movie Gangs of New York, the story takes place at Five-Points which is right smack in this neighborhood. That’s not really relevant aside from the fact that this was not a great neighborhood so maybe it wasn’t someplace you’d want to tour looking for the original Guild factory. You know, if this was 1862 and top-hats were in fashion. 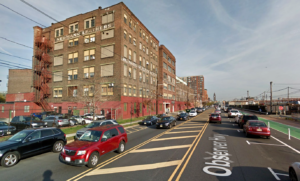 I had thought that the Hoboken Guild factory was on Newark Street, mostly because they named an entire line of guitars after the street. As it turns out (Hans’ book to the rescue again), the address of the building in question is actually on Observer Highway ( Newark Street is actually on the other side of the building), but I guess the “Observer Highway line of Guitars” doesn’t roll off the tongue like Newark Street does. Marketing: where facts are a secondary nuisance. 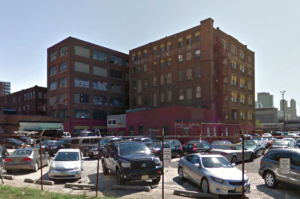 This is the view of the Neuman Leather building from the Newark Street side as seen from Google Maps (which is also the source for the first picture). 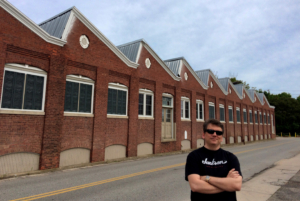 This entire article got started when I visited the Westerly Guild plant. I was in Westerly to buy a rare Guild from someone who had lived in the town his entire life, and he was gracious enough to lead me to the plant and tell me all sorts of stories about the years when Guild occupied the building.

Yes, I was wearing a Jackson T-shirt that day, but in my defense, all of my Guild T-shirts flat-out suck. Hey Guild – make better shirts! 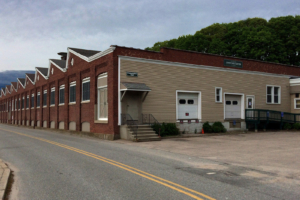 The Westerly plant started production after Guild was sold to the Avnet Corporation in 1966 and stayed in this location until 2001, which makes the Westerly Guild factory home to the brand for 35 years. This is the longest tenure in Guild’s history and for me, this is and will always be the home of Guild. I commented to my daughter who took the picture of me in front of the building, that the majority of the guitars I’ve owned in my life came from this very building. Just read my other articles and see for yourself.

The current occupant of this part of the building is the Jonnycake Center food pantry and thrift store. Here’s an article about them that I found interesting.

After posting these pics on the Let’s Talk Guild forum, someone asked, “I wonder what the Hoboken Site is like today?”, and the rest of my day was spent researching Guild factories for this article. That’s how the creative part of my brain works. Luckily, that sometimes makes me money. Sadly, this is not one of those times.

Fender bought Guild in 1995 but didn’t move the factory out of Westerly until 2001. 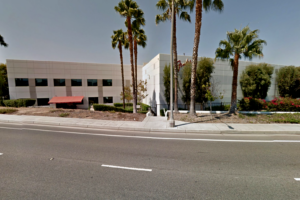 After Fender bought Guild and moved them out of Westerly (an act most of us will never forgive), Guilds were made in Corona California from 2001 to 2004.

This picture is from Google Maps and no matter what view I took, there was a tree blocking the many Fender signs. That kind of made me laugh because that’s not something most companies let happen. I mean, if there’s one thing that Marketing wants the world to see it’s the damn logo! 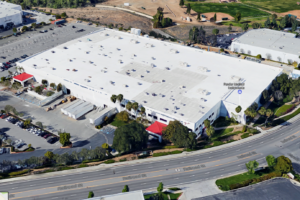 The Guild electrics from this period are pretty great (except for the pickups), but the acoustic guitars weren’t quite up to snuff. In typical Fender fashion, just as the crew at Corona started to get the hang of making acoustics up to the Guild standard, they stopped making electrics and moved the manufacturing of acoustic guitars to Tacoma, Washington.

In 2004, Fender bought Tacoma Guitars and moved Guild production there from Corona where it stayed until 2008.

This location was surprisingly difficult for me to find, and it was only through this web page on Frets.com that I found the pic of the factory from a tour of the factory in 2001, some three years before Guild was involved. 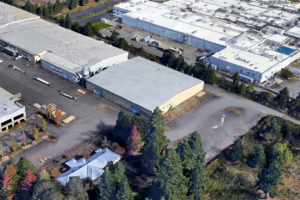 I then found this forum post over on Let’s Talk Guild where someone described the plant as being next to the Frederickson Power generating facility. I quickly found that on Google Maps, and then my sleuthing began in earnest because as much as I’d like to, I don’t have the time or resources to hop on a plane and fly out to Tacoma Washington, though I was there about a year ago and kick myself for not thinking of it then. Still, based on what I’ve learned, I’d never have found it by car. 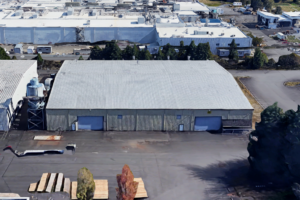 Google Maps allows 3D rendering of some locations (which is how I got the cool 3D map of NYC and the Fender building above), and using that I kept spinning and zooming the map all around the power facility until I found this small squarish yellow building. Doing some more zooming and spinning, I managed to capture this image, which if you compare to the original picture in this section, you can plainly see is the same building. Sadly for everyone at this plant, Fender again did what Fender does in 2008 and closed it down. 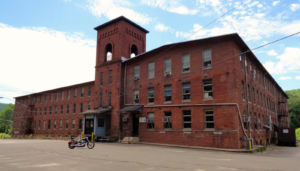 In 2008 Fender (FMIC to be precise) bought the Kaman Music Corporation and moved production from Tacoma to Hartford Connecticut in the same plant that made Ovation and Hamer guitars.

The pictures in this section are from this blog and are used with permission. I used these pics because they’re pretty damn great (and I don’t say that lightly) and were just perfect for what I wanted to do with them. The fact that they came from his blog is why you see a motorcycle in the first pic. 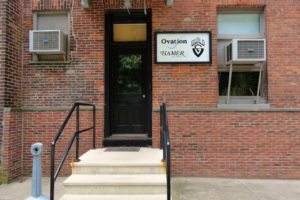 An Ovation-centric article about this location can be found here, which all sounds quite familiar in an unsettling sort of way. This is an out-of-the-way sort of building where some great people made some damn great guitars over the years 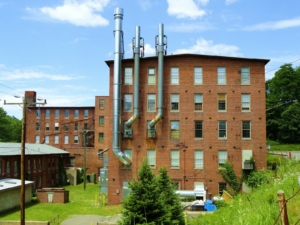 Fender closed this plant for Guild production in 2014 after only six years. As is typical of a post-Fenderized guitar factory, Here is a news article about what happenes to the large space after Fender pulls out.

Fender pulled out because they sold Guild. Finally. 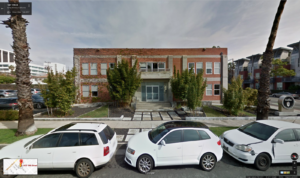 In 2014, Fender finally got out of the “Let’s move Guild all over the country” business and sold the brand to Cordoba who moved Guild production across the country again.

These pics are once again from Google Maps, and the first pic shows the Cordoba headquarters in Santa Monica California. From what I can tell this is just a business office and no guitars are actually built there since the guitars are made in Oxnard. 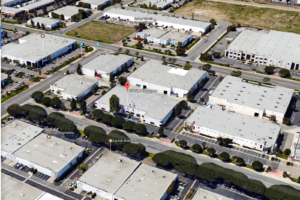 Doing my Google Maps spinning and zooming trick, I found the Oxnard address for Cordoba which is this nondescript building surrounded by other similarly nondescript buildings. As of this writing (2017), this is the location for all US-Made Guild guitars including the GSR electrics.

There are some pretty cool videos of this new factory as well as some information on the move on Guild’s webpage here. Here is another cool article about the Oxnard factory from Reverb.com. Again, marketing in the age of the Internet and social media makes for some nice presentations from the companies involved. Cordoba has also linked to a nice article about the new Guild ownership from Music Trades Magazine.

Cordoba so far seems willing to do things the right way which is the only way to make a Guild. It is my sincere hope that they care for the brand as much as we, it’s most fervent fans, so obviously do. 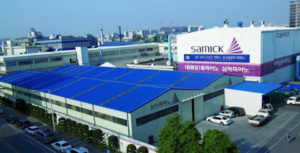 Until now, I’ve only covered the US-based Guild factories.

Because I see this questioned asked a lot, I figured I’d put it in print (er, screen) that Guild Newark Street guitars are made in the SPG factory in Korea. You can read more about that fact here, though I was unable to find much more about the plant or any details beyond what you see here. 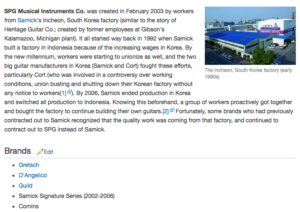 There are a few guitar factories in Korea which no doubt leads to the confusion, but the Guild Newark Street guitars are made in SPG.

If you have more information about the SPG plant, especially if you have pictures, I’d love to include that information here and will of course give you credit for anything you provide. 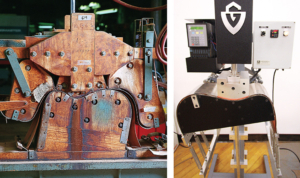 Here’s one last link from Vintage Guitar Magazine which is entitled Guid in the Post-Fender Era. Good stuff, especially because it includes this very cool picture of the side bending machines from Westerly (left) and New Hartford (right).

Given the number of factories I had to track down, I really hope that the current home of Guild in the US stays there for a long time. While I’m wishing, I’d really like to see the return of some of my favorite Guild electrics. How about it Cordoba? If you make a US-made Bluesbird again, I’ll buy one, assuming it’s not $5,000.

2019 edit: Here is a visual timeline of the US factories and the companies that owned Guild:

4 thoughts on “Guild US Guitar Factories”