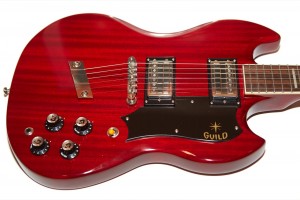 I used to have a reputation on the Lets Talk Guild forum as the guy who hated Guild S-100 guitars. I just never saw the lure, probably because I loved other models so much. When the opportunity arose to score one of the newer Newark Street models for a song, I jumped on it, figuring I could flip it and make a couple bucks profit. Sadly, I wasn’t prepared to be impressed by this guitar.

I bought this guitar used on LTG along with a Newark Street (NS) X-175B, which I will review in another post. I’ve discovered that these import Guilds absolutely crush the competition in the same price range. Let’s see why. 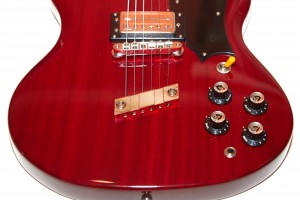 The finish on these Newark Street guitars is polyurethane. There are plenty of reasons to dislike poly and there are many reasons to like it. Most of the times I dislike poly have to do with the thickness of the finish. I have a poly-coated Strat that feels like it’s encased in a plastic shell. This S100 doesn’t feel like that, though it doesn’t have the organic feeling of a nice thin lacquer, either. 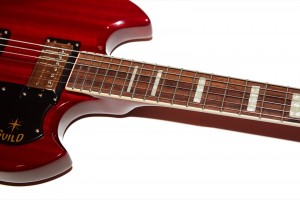 The frets are great with a nice shine after polishing, and very nice, well-finished ends. The neck is straight as has been the neck on every Guild I’ve ever owned, and I’ve owned quite a few. Thinking back, I don’t think I’ve ever adjusted the neck relief on any Guild.

The fretboard and inlay quality isn’t what I’d call high-end, but with some bore oil the rosewood darkened a bit. The edges of the inlays looks a bit rough, but the big deal to me is that I can’t feel those edges when I’m playing, so they don’t bother me at all. Remember, for me this is a $500 guitar, and in a $500 guitar I’ll take playability over cosmetics every time. 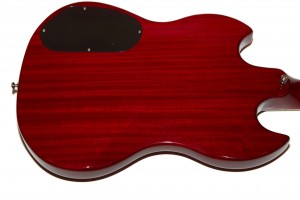 The guitar feels heavy and weighs in at 8 lbs 8oz. I’m mentally comparing this with a Gibson SG-P90 that I used to have (GOTW model #37) and this one is much heavier, though I think it’s just denser mahogany in this one. Still, it’s a smallish guitar, so the weight is not concerning – just noticeable. Hell, I think the weight being centered in the body will prevent it from doing the neck-dive thing when standing with a strap.

I discern no problems with the build of this guitar. None. The binding is perfect, there are no raised frets, the finish is perfect, the screws are all flush, the electronics work, the logos are straight, and all the mechanical parts work as advertised. This is a lot of guitar for the money. 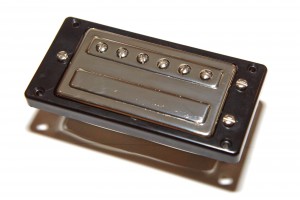 The pickups on this model are reissue Guild HB1s that are supposedly direct copies of original HB1s.

The pickups sound great tone-wise. They’re surprisingly articulate which is a big deal for me. Usually when I pick up an electric guitar I play it unplugged for an hour or so, then plug it in at which point I often decide within seconds to replace the pickups and/or electronics. I did not get that feeling with this guitar, and let me tell you, that’s a big deal. 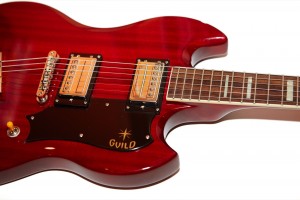 The new HB1s seem to have some sort of, for lack of a batter word, “fizziness” to them that I couldn’t seem to dial out. It’s only there under heavy distortion, and it’s slight, but it’s there. I lowered the bridge pickup to see if the pickup was just too close to the strings, but even with it being too low I could still hear that bit of “fizz”.

I should point out that I’ve played guitar since the ’70s, and as such I’ve played some stellar and some truly awful instruments. I am well acquainted with both excellent and crappy pickups, and when I say “fizz”, I don’t mean the kind of sound we used to get from terribly made import instruments from the ’70s. I mean the pickups sound great, but there’s a little bit of fizz.

I’m not sure what’s causing it, either. It could be the electronics, it could be something inherit to the pickups like different wire, different metal, etc., or it just may be the fact that after all, these are not vintage HB1s. 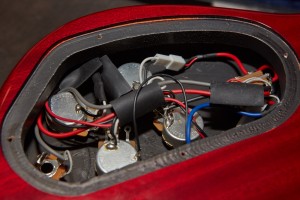 The electronics are comprised of four pots stamped “Made in Korea JSE 2013”. I find it amusing that there are multiple pieces of shrink-wrap tubing on the wires, of which only one has actually been shrink-wrapped. I thought maybe they were just being used as insulation, but they would work better if they had had some heat applied to them, not to mention the fact that some of them are not covering any bare metal.

The soldering is typical of modern import guitars and is functional without being elegant.

Even though the pickups have circuit boards which allows easy soldering on them like the original HB1s, the electronics cavity contains quick-release connectors for each pickup. This is fantastic for swapping out pickups, assuming you get replacements with the same connectors. I recently bought a replacement reissue HB1, and it did not have this connector on it. Still, it’s easier to wire on a connector than it is to solder a potentiometer. 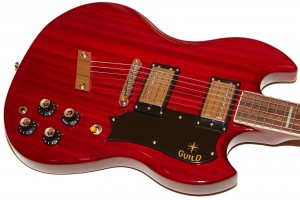 The bridge is a tune-o-matic piece of… well, let’s just say that I’m not a fan of tune-o-matic style bridges. Still, as of right now there are no problems with it so no complaints aside from my own prejudices.

I dislike the yellow plastic switch. I’ll likely replace it with a chrome one. This is purely a cosmetic preference.

I don’t like the goofy Guild logo on the pick guard. I dislike logos anywhere except on the headstock, so feel free to consider that another one of my personal quirks. 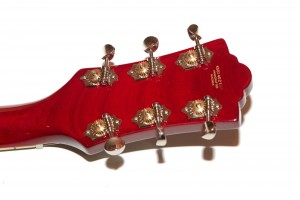 I don’t like the smaller open-gear tuners because I really love the late-70s era Guild tuners. This guitar is targeted for my 15-yo daughter, though, and she loves them because she has small hands. These tuners don’t have the rock-solid feel of the better tuners out there, but again, this is a $500 guitar.

A quick word is in order about the case. The case is rectangular, and seems sturdy enough, but the latches are very loose. I do not feel confident that the latches will keep the case closed, so if possible when buying one of these, see if you can check out the latches to make sure they close securely. 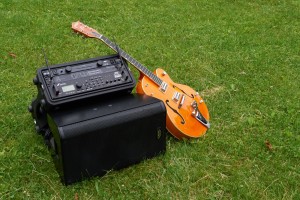 It sounds *great*. I think these new HB1s are damn-near a home run. I haven’t A/B’d the guitar against my vintage HB1 Guilds, but I’ll tell you that if I didn’t have one of those, I wouldn’t worry about it. My daughter and I spent the evening playing around with the guitar plugged into my Axe-FX Deluxe (shown with my Gretsch SSLVO)  which even my tube-snob self likes a whole lot. We set the rig to sound like a Marshall JCM800 and went to town. All I can say is, “wow!”
All recordings in this section were recorded with an Olympus LS-10. Amp is an Axe-FX set to “Basic Brit 800” with no effects. Speaker is a QSC K12.

My daughter is a huge Green Day fan, and she was pumping out Green Day riffs left and right, and they sounded *good*! She’s also a fan of Rocky Horror, so we had to play some of that. The problem is that not only did she fall in love with the guitar, but she also fell in love with my Axe-FX! Now she wants me to build her a Marshall clone. That’s my girl.

We cranked up the gain and played some Muse riffs and they sounded spot-on. With a nice drop-D this guitar makes that absolutely filthy sound that we were chasing. Naturally, that led to some SoundGarden of dubious riff quality.

My only complaint with the pickups is that they have a bit of “fizziness” to them that I can’t seem to dial out. I don’t really hear it in the recordings, so it may very well be in my head.

Naturally, there was a fair amount of just noodling around both on the neck and bridge pickups, followed by some mangling of a favorite song from the musical Hedwig and the Angry Inch.

And yes, I’m aware that all of the sound samples are using distortion. That’s what this guitar gets used for in my house, so that’s how I recorded it.

Playability is superb. The guitar has a nice low action, a nice modern neck width, and a nice neck depth that isn’t a baseball bat and isn’t shredder-thin either. My Gibson SG with P90s was a great guitar, but the neck was like a tree trunk.

I actually like a beefy neck, but the Guild NS S100 is just right. Of course, that means different things to different people, but for me not being at either extreme makes the guitar very easy to play.

I’ve been playing for a very long time (since 1979), and I’ve played a lot of truly terrible $500 guitars. Many modern import guitars in the sub-$1000 range, though fully functional, feel lifeless and dull to me. This guitar does not give me that feeling. In fact, I’ve spent far too much time playing with this guitar since it arrived, which surprised me because I never expected to like it.