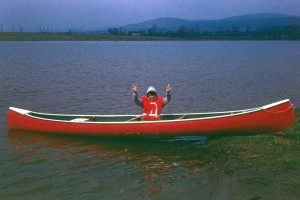 My wife’s brother’s wife’s parents (my brother in-law’s in-laws) owned a nice chunk of property about 10 miles from ours. Though we enjoy our two acres, they had over 30, including their very own sizable lake. We had a standing invitation to bring the dogs to enjoy the lake, which we did from time to time.

Cozy’s favorite pasttime was saving sticks thrown into the water. The ones that were lost were quickly forgotten like last year’s iPhone, causing me to wonder at the veracity of all those stories of Newfs saving people. 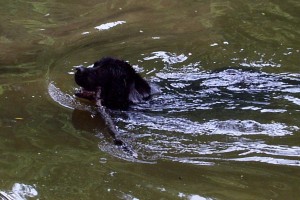 If there were 10 people in the water and Cozy saved two I couldn’t shake the image of a happy Cozy wanting someone to throw more people into the water when there were still eight people out there drowning. Still, my Cozy saved all the sticks she could find with gusto. Daisy would happily romp into the water by her side but really had no interest in any lifesaving. She was just happy to be part of any excitement that didn’t involve turkey basters and peroxide. Perhaps she just liked any adventure that distracted us from the truth of her undignified behaviors. 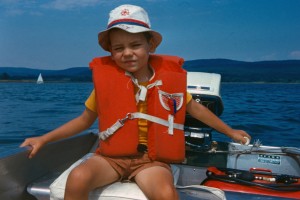 On this trip, there was a new canoe near the dock. I love boats of any kind as shown by pictures of me taken in the 1970s, resplendent in my sailor’s hat and huge life vest, sitting in various boats. When I saw this canoe I knew I would have to take it for a spin around the lake. As usual, I hadn’t thought my clever plan through beyond my paddling the canoe in the water. I’m simple that way; boats make me stupid. I think they make everyone stupid, which explains the propensity of people in boats to wear funny hats. 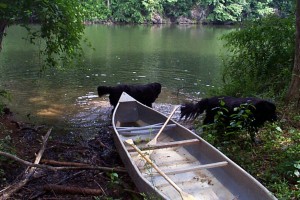 Operating a canoe looks easy but they can be challenging, especially when paddled by a lone captain, funny hats notwithstanding. Luckily for me, years of goofy hats and a chest strapped with orange foam had taught me a thing or two about seamanship. After donning my goofy hat I pointed the canoe into the water with only the tip of the stern on the shore. I put the paddles into the canoe where I would be able to reach them, then shoved off with the other foot and proceeded to expertly set sail, or to precise, paddle. I quickly sat down, grabbed a paddle and started my discovery of the two acre lake. 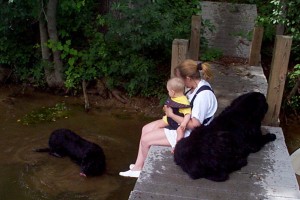 Once I got the canoe about twenty feet from the shore, I spun the canoe around to check on Cozy, Daisy and my girls. Daisy was sitting on the dock with Lauren. Meghan, secured to Lauren’s chest with some sort of complex baby restraint system, seemed happy to be alive. Cozy was standing on the shore where I had pushed off and was barking at me as if the water were roiling with zombies all hungry for the feeble brain in the boat. She seemed quite upset about something, but I couldn’t figure out what it was since I had dutifully checked for signs of the undead upon entering the water. The price of an undead-free world is eternal vigilance, after all. When I tried to calm her, “It’s OK Cozy Bear”, she jumped into the water and swam out to save me.

Cozy was a great swimmer, but she wasn’t in the best of shape, and she had been busy saving sticks for the past half hour so she was a bit tired. She just didn’t seem to like the idea of me being in the water without her. She paddled her way out to me, nothing but her face and nose sticking out of the water, the black shadow of her body trailing behind her as she steered with her tail. 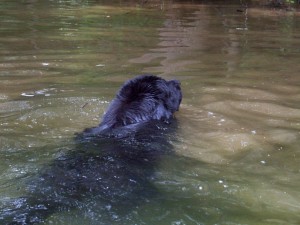 When she got to the canoe, we both looked at each other wondering well now what? I paddled a bit and she followed. I was getting worried because the more I paddled, the more she followed me and while she was tired and getting further from shore, I had a boat with a masterful captain. I could put down the paddle and rest, but she needed to keep swimming to stay afloat. I decided that it would be better for both of us if I went back to shore, so I started to turn the canoe towards shore intending that she would follow.

Since canoes have no rudder, they are steered with the paddles. The person in the back of the canoe puts his paddle in the water and uses it like a rudder until the required direction is attained, at which point the paddle is removed from the water and normal paddling is resumed. With only one person in a canoe, all the weight is in the back, so the front raises out of the water. This can actually make the canoe easier to turn since the entire boat isn’t in the water resisting said water. Simply paddling on one side will cause the canoe to turn in endless circles when manned alone so constant course corrections are needed.  Years of funny hats and a nautically obsessed father had taught me well, and I knew that paddling backwards on the opposite side helps to make the canoe turn faster, so I put my paddle into the water on my left side and proceeded to paddle backwards, spinning the canoe towards shore.

That’s when it all went bad.

When I put the paddle into the water near her, Cozy started to paddle a bit harder, perhaps confused because there was now a 17 foot canoe hull coming right at her. While the front of the canoe was sticking up out of the water, my 200 pounds had made the back sink a little bit deeper than normal into the water. At this point, Cozy decided that she was tired, and she wanted to get out. She did what anyone in her situation would do; she tried to climb into the boat.

Canoes are not what I would call stable watercraft. I was taught from an early age never to stand in a canoe since they were so easy to tip and we even learned ways in which one person would crawl through the legs of the other person if they wanted to switch positions while afloat to prevent the wobbly things from capsizing. In the brief second that I noticed Cozy’s paw on the gunwale, I realize that I had never taught Cozy any of this useful seamanship. I had never even bought her a proper hat. “Cozy no!”, was my only defense, and it turned out to be of little use. As Cozy tried to crawl up into the canoe, her weight and leverage caused the canoe to do a tight flip in place, launching me into the water next to her. 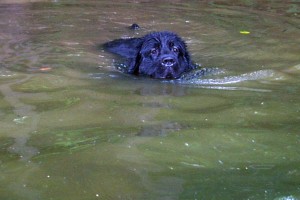 Now there were two out of shape idiots in the water, neither of us wearing proper headgear, as well as an inverted watercraft in danger of being scuttled by a dog. Naturally, being a well-trained captain, my first thought was to right the canoe.

Aluminum canoes will sink if they tip, and it was important to either get it to shore or right side up before I was buying our hosts a new one. I grabbed onto the canoe and tried to get it righted, then realized that Cozy was still swimming and a lot more tired than I was. I grabbed the rope that was tied to the front of the canoe and started to swim the short distance back to shore as Cozy followed. 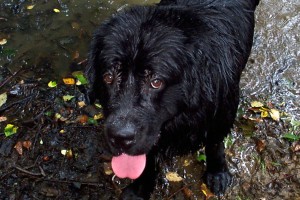 As Cozy and I both touched ground, she walked up onto the beach while I crawled, the half-sunken canoe in tow. I’m pretty sure she thought that she had saved me, and came over wagging and kissing my face. I’m also pretty sure I remember the sound of Lauren laughing, but I’ll admit to my memory being a bit fuzzy in that regard. Cozy had saved me and I had saved the canoe which made her a good girl and me a good captain. Of course, neither the boat nor I had needed saving until Cozy came to save me, but I guess all that matters is that everyone and everything was saved. Everything, that is, except for my hat which was tragically lost at sea, the tale of which is told in song by wistful sailers to this day.
More about: [ Guild Guitars ][ Dogs ][ Cozy Tales ][ Ferret-Dog ]