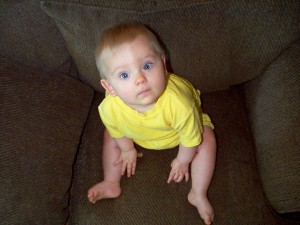 As the pregnancy developed, Lauren took the idea of eating for two to heart, all the while telling everyone that the idea was a myth. Lauren had naturally researched pregnancy to the extreme, so she knew what she was doing, and we just figured that nature would take its course as it had for millions of years before we got involved.

In Lauren’s ninth month of pregnancy we went in for one of the many ultrasounds to check the baby’s health. Lauren’s OBGyn was very smart, very type-A, and very young. We had long ago nick-named him Doogie after Doogie Howser from the TV show of the same name. Doogie took one look at Lauren and told her that he wanted to induce her. Lauren flat-out refused, insisting that nature should take its course and that nothing should impede the beauty of the process or some damn thing.

Doogie didn’t like being denied, but I think he had also learned that very pregnant women should be feared, so he didn’t seem to actively push the issue. Lauren, a normally petite five foot 100 pounds had grown so much that she had had to have her wedding ring sawed off by a jeweler a month earlier. Still, she refused the induction.

Doogie was a very busy and successful doctor, but he had a very, shall we say, modern medicine way about him. To help with his busy practice, and perhaps to help soften his image, he had hired a midwife. The midwife was a wonderful woman who complemented Doogie’s rigid modern views with a more laid back crunchy-earthy approach. She offered  an alternate viewpoint in many cases, and together they did great work. As a woman, she also had an understanding of women that Doogie never would, what with him lacking the estrogen and all.

When the midwife walked in, Lauren pleaded her case, expecting the midwife to side with her. Before Lauren could finish her first sentence, the midwife stopped in mid-stride and said simply, “Good lord woman, you need to be induced! You look like a pork sausage!”

Here’s a tip: If you want to make a very pregnant woman feel good, avoid comparing her to pig meat. Lauren’s touchy-feely midwife friend had betrayed her, but she had made her point. We made the appointment to be admitted to labor and delivery and went to the Starbucks in Morristown to pass one of the few remaining hours that we had as a childless couple.

At 4:30 AM the next morning, I bore witness to the miracle of birth. Well, more accurately over the course of many hours I got to watch a technician stick a needle into Lauren’s spine. I got to watch a nurse who reminded me of an 1976 East German olympic swimmer apply gel directly to Lauren’s cervix. I got to watch Lauren’s water break, and I got to watch the labor and delivery unit of the hospital operate. Somewhere in the mix I was commanded by Lauren to go home and check the dogs, which of course I did. I got to witness 16 hours of pain and suffering while Lauren pushed. I got to watch CNN’s headline news 956 times while they repeated the headlines every 20 minutes into the wee hours of the morning. At one point even the delivery nurse told Lauren that she wanted the baby born by the next time the story about the Pandas in China returned.

I got to see my daughter Meghan born, which really was pretty amazing. I got to cut the cord, which though symbolic, really was pretty disgusting. It was also a lot harder than I thought it would be. I got to witness the miracle of the afterbirth. By miracle I mean alien resurrection, which is about what it looked like.

I learned that after the baby is put on Mommy’s chest for them to bond for a few short minutes, they give the baby to Daddy who gets to carry her to the room where they clean her up and weigh her. I got to see my Meghan’s eyes for the first time she ever used them. I was the first thing she saw, though I doubt she remembers. I remember.

I learned that things happen to a woman during and after a birth – things of which  men should have no part. There was blood and uncontrolled shaking, and blood, and slime, and blood, and discarded organs, and blood….  These were things that men should never witness outside of combat. I got to witness an episiotomy. I swear hedge clippers were involved. I didn’t need to see that. I’m pretty sure men don’t even see that in combat. Then to top it all off there were needles and thread to fix up the damage caused by the hedge clippers. It’s a wonder I didn’t leave there needing therapy, and all I did was watch!

The next day we brought Meghan home, securely strapped into the best car seat money could by. That would also be the last time we used that car seat because it was so damn secure that it was near impossible to get her in and out of it.

Cozy was Cozy, but Daisy was especially excited. When Meghan started to cry, Daisy would run to the crib, cock her head, then run to Lauren and wuf at her as if to say go check on your puppy you stupid woman!

Normally new parents are very protective of their first babies, and we were no exception. We, however, had the added risk of two huge and very curious dogs. Any time Lauren would sit down with Meghan on her chest, she would have two big black noses in her face begging for some quality sniff-time. Both Cozy and Daisy were remarkably gentle and seemed to respect their boundaries, but we knew that we had to be very observant. They were so big and strong and Meghan was so little and helpless.

As time passed we fell into the routine as dictated by Meghan. Babies must be kept clean, and bath time was a part of the routine. Though we bathed Meghan in the sink for the first few months, she eventually graduated to the bathtub. While Cozy had watched the sink bathing with interest, she drew the line at the tub. From Cozy’s perspective, putting a young baby into a large vessel of water was an obvious mistake. Said baby would of course need to be saved no matter the cost or effort.

From the moment Lauren put Meghan into the tub, Cozy would be right by her side with her head in the tub, ready at a moment’s notice to push Lauren out of the way and save the baby. Clearly Cozy didn’t fully trust Lauren with a baby yet. Remembering her zeal for saving rocks from pools – pools that lost their lives in the process – we made sure to keep a careful eye on Cozy. She was never a problem, but she always kept an eye on the proceedings.