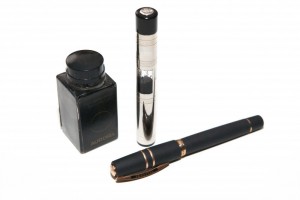 The Visconti Traveling Ink Pot is the solution to a problem that many people, myself included, didn’t know existed. Namely, how do you fill a fountain pen while traveling? For me, the answer has always been to use cartridges. I greatly prefer bottled ink over the ink found in most cartridges and I had accepted the compromise of lesser ink in favor of portability. All of that changed when I bought a new pen that did not support cartridges, or even a converter. How was I to use my wonderful new pen during one of my many business trips? Was I to be forced to bring a bottle of ink with me, or worse, leave my new pen at home? 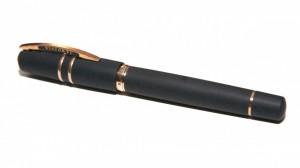 The pen in question is a Visconti Homo Sapiens fountain pen. I can’t say enough about how much I love this pen. From the feel of the material to the wonderful smoothness of the nib, this pen quickly became a favorite of mine. As much as I love the pen, though, I despise the filling system.

The Homo Sapiens pen uses a power filler system which means that there is an internal reservoir for the ink. Ink is loaded into the pen by unscrewing and retracting the filler mechanism, inserting the nib into a bottle of ink, and then plunging the power filler while trying not to spill anything. At the very least, my attempts at this procedure resulted in ink all over the section of my nice new pen. At worst, profanity, wasted ink, paper towels and lots of running water. After one such fill, I thought, there has to be a better way.

A fountain pen is composed of multiple parts or assemblies. Those parts may include, depending on model and configuration, the cap, the barrel, the nib, the feed, and the section. The section is the part of the pen in which the nib and feed are connected to the rest of the pen. It is generally the part of the pen that you might call the grip. 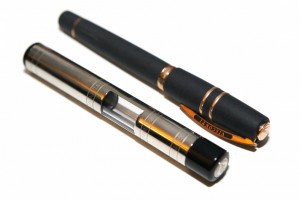 Enter the Visconti Traveling Ink Pot. This clever device is elegantly simple, in that it is simply a tube that holds ink. It is designed to address the needs of people like me who insist on traveling with fountain pens, and who either want or need to use bottled ink.

The tube has a removable stopper on one end that is sealed in the tube by a relatively strong rubber seal. Once the stopper is removed, my Homo Sapiens fountain pen slides in and is held tightly by the same seal. This seal keeps the ink neatly within the ink pot, both when sealed by the stopper, and when sealed by a pen. The seal is very tight, and I have to gently, but firmly, twist both items in order to remove them from the tube. 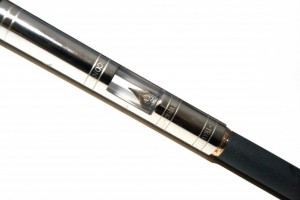 In the center section of the nicely decorated ink pot, there is a glass window that lets you see both how much ink is in the pot, and how far the nib of your pen has extended into the reservoir. On my pen, the point of the nib extends about half way into the visible area within the pot. There is also a line on the metal strips on the side of this window indicating how high the ink should be filled.

The instructions recommend that the first use of this device should be done with water. Apparently if you’re not careful, the ink pot can go shooting across the room, spraying ink as the fuel/exhaust mixture is expelled from the nozzle of newly created rocket. Since such a spectacle would be worthy of an article unto itself, I opted to forgo the water test and went straight for the full-blown ink test. 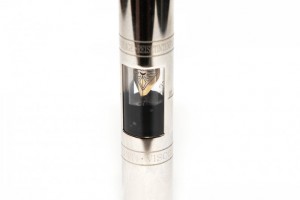 With the included eyedropper, I filled the ink pot up to the recommended level. I then carefully inserted my beautiful pen into the contraption and proceeded to take pictures. I wanted to make sure that I had a photographic record in case it all went horribly wrong.

Luckily I had read numerous other reports online of humorous and messy results, so I knew to hold on to the pen and ink pot tightly. I was tempted to think I was smarter than those who had travelled this path before me, and thought that I could just keep the ink pot firmly on the desk while pumping downward. I quickly realized that such an effort would be fruitless because there is an additional step in the process. The ink port and pen must first be inverted before the pen will take ink. 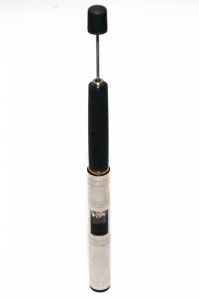 The best way to describe this process is to think of a doctor filling a syringe with a drug from a vile. The only difference is that with the Visconti Traveling Ink Pot, you must put the pen in the bottle before you invert the bottle. If you do it like the doctors on TV, flipping the ink pot and then inserting your pen, you’ll end up covered in ink, and no one wants that.

With the pen and ink pot inverted, I held them together tightly with one hand and plunged the power filler three times, letting the pen pull in ink for a 10-15 seconds after each stroke. Not a drop of ink was spilled. I could see bubbles emanating from the pen, which led me to believe that ink was indeed being pulled in by the filling system. After I was done, I righted the mated pair, and let it sit for a few seconds in the hope that any extra ink would drip off of the nib. After slowly twisting the pen out of the ink pot, I replaced the stopper and put the pen down for one final picture.

In the last picture, you can see the nib and section after I filled the pen with the Visconti Traveling Ink Pot. I did not clean or dab the nib at all before taking this picture. If you zoom in by clicking on the image, you can see how far up the section the ink went. From filling the ink pot with an eye-dropper, to filling the pen with ink, I completed the entire operation without spilling a drop. Without using a rag, paper towel, sponge or blotting paper, I filled my pen without getting any ink on my hands. Imagine filling a piston-type fountain pen without getting ink anywhere but in the pen. 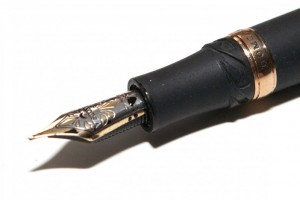 The Visconti Traveling Ink Pot is a wonderful device that functions as advertised. It’s a bit pricey for what it is, but it feels like a quality item. I have no problem paying for something that actually works, especially when it looks and feels like it was worth the price. I bought mine on Ebay where it came with two eye droppers, two ink storage bottles, a leather travel case and a package of Visconti blotting paper. All for less than the retail price of the ink pot alone. Be advised that there are multiple versions of the Visconti Traveling Ink Pot out there. I have no experience with them, so cannot comment on their quality or usability. I can say though that this one is a keeper.
More about: [ Guild Guitars ][ Dogs ][ Cozy Tales ][ Ferret-Dog ]