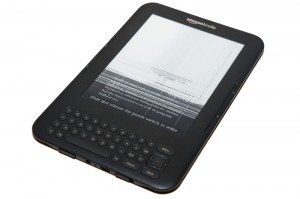 I liked my Kindle. At least for the 30-some hours it worked. The screen suddenly stopped working as shown in the included pictures. I tried rebooting it through the menu and by holding the power switch on for 15 seconds. Neither technique solved my Kindle screen woes. The Kindle seemed to function fine. The menus worked and my computer saw it as a drive when connected via the USB cable, but the screen was toast.

I called Amazon’s dedicated Kindle hot-line at 1-866-321-8851 and spoke with a wonderful woman who asked me right away if it had been dropped.

“Why?”, I asked, “Is there a problem with them being dropped?”

She replied that some people drop them hard and there are no problems since they’re “more sturdy than they look.” She also said that if you drop them just right, you might have a problem like this. I could neither confirm nor deny that such a thing happened to mine. She laughed as I jokingly said that I couldn’t confirm that my kids were using it as a Frisbee either (they would never). 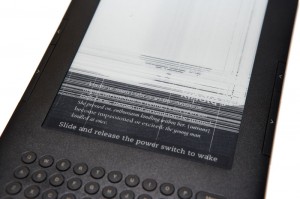 The good news is that Amazon is going to send me a new one at no cost via next-day shipping. Amazon’s support experience was exemplary. Sure it sucks to have my new toy in such a state, but they’re doing everything in their power to make it right.

I wanted this thing because I travel a lot. I can’t imagine what a couple of flight’s worth of baggage handling would do to this thing. Of course it will be in my carry-on bag, but as any frequent flyer will tell you, that’s no guarantee of kindness.

If you have one of these new Kindles, be gentle with it, don’t drop it, and get protection. The first thing on my to-do list for tomorow? Get a case for my Kindle.

2 thoughts on “My Fragile Dead Kindle”