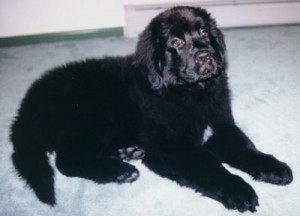 We have a rule in our house that states, “Happy tails never get punished.” This rule harkens back to the halcyon days when Cozy was a puppy, circa 1997. Lauren and I were newlyweds, we had a beautiful, clean house, and our precocious little pup had grown enough that her tail could sweep the coffee table clean with one wag. We were young, eager to please parents of our first puppy, so our rules were designed to foster the long-term happiness of our fuzzy little bundle of joy.

Fast-forward thirteen years. Our house now has two pre-teen children. The pretty green carpet in the picture has been ruined (by dogs) and removed. Cozy and Daisy have long since passed over the Rainbow Bridge. Now Annie and Guinness rule the roost, but still the rule remains, “Happy tails never get punished.”

Another rule I’ve always been fond of was the one that states, “no open drinks near the computers.” Lauren and I never saw eye to eye on that one though, so it was never ratified through due process. For those of you who aren’t married, that means Lauren rolls her eyes at me every time I suggest that she should move her glass. Now don’t get me wrong. I love my wife, and she’s one of the smartest women I know. Hell, she used to be a Unix admin back in the day, which is what make me roll my eyes when I think about the events I’m about to describe. 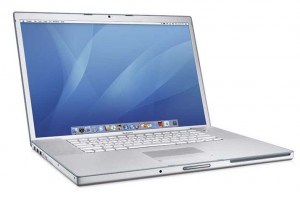 Lauren has a very nice Macbook Pro that I bought her when her five-year-old Dell broke for the last time. This sexy beast sports a 17″ non-glare widescreen display that would be the envy of practically any nerd-girl. Of course mine’s better, but someone’s gotta be the alpha-geek in the house, and I’ll be damned if it’s going to be Lauren!

Lauren has always professed to loving her Macbook Pro, and it sits on the dining room table where she can access it easily throughout the day. From her throne at the end of the table, she coordinates girl-scout troops, keeps track of various children activities, and generally keeps all of our lives running smoothly. Like many families, her computer is the central repository for our lives. From important documents and photos to video conferencing with me when I travel, Lauren’s Macbook Pro does it all, and does it well, all the while looking great. Just like Lauren!

The problem is that Lauren is the center of activity for the entire house. For example, Lauren is constantly navigating through a pile of dogs who usually sleep at her feet. One of those dogs has certain ferret-like tendencies and a penchant for butter. Her name shall remain obscured for the remainder of this tale to protect her sterling reputation. For the sake of her innocence, I’ll call her Fannie.

Fannie has only survived the two years she’s lived in our house because of the “Happy tails never get punished” rule. She has a very happy tail, not to mention a happy nose and happy paws. Hell, when her whole body comes sliding down the length of the hallway, slowly turning as she scrambles in a vain attempt to gain traction on the slick wooden floor, her whole body is happy. Sure she has bowled various young children over, but happy tails never get punished! Kids should learn to get out of the way after all.

This Wednesday was Ann.. er.. Fannie’s Gotcha Day. For those of you not familiar with the glorious celebration of Gotcha Day, allow me to explain. Gotcha Day is like a birthday, but instead of celebrating the anniversary of your ferret’s birth, you celebrate the anniversary of the day you rescued/adopted/found your ferret. Assuming of course, you have a rescued ferret. Only rescued or adopted ferrets (or cats, dogs, sheep, cows, other animals, children and possibly robots) and their families usually celebrate Gotcha Day. As with many such families, we celebrated with our adopted Fannie-ferret on her special day.

Gotcha day is a real thing! You can read all about it for yourself over in the Wikipedia section of your local Internet: https://en.wikipedia.org/wiki/Gotcha_Day

Actually I wasn’t present for the celebration. I was at work. My introduction to the day’s events started with a phone call that went something like this:

“Well when I tried to boot, I couldn’t choose the proper boot device, so I need the boot disk.”

Lauren is no dummy, and she knows her way around a computer – hence the techno speak response. We’ve also been together for over 20 years, and I knew instantly that she was hiding something. The last time I got the runaround like this, she had backed her Subaru Outback out of the garage and tore the expensive heated mirror off the side of the car. This was after I had tried to tell her not to park so close to the side of the garage, to which she had repeatedly responded with rolled eyes and a blatant disregard for the opinions of idiot men. The issue wasn’t that she needed the boot disk. The issue was why she needed the boot disk.

“Uh huh…” I was just waiting her out at this point. Lauren doesn’t lie very well under the intense pressure of an advanced interrogation technique like this.

“Well, my glass was on the table, and Fannie’s happy tail knocked it over…”

I had stopped listening. Not only had there been a spill, in accordance with my repeated warnings, but she had thrown Annie under the bus to save her own skin! Dammit! I mean Frannie. No wait… Fannie. Holy crap I suck at this secret identity stuff.

First she had blamed the dog, then she had invoked the “happy tails” rule, knowing full well that I wouldn’t be able to blame anyone. Clever girl. I’m sure Annie’s happy tail was the physical cause of the spill, but the spill would have been a minor cleanup had it occured away from the $3000 laptop. If only someone had considered that possibility and come up with a “no open drinks near the computers” rule. Luckily I had bought the laptop used, and for a great price. Of course that’s where things get weird.

Coincidentally, I had just sold a guitar to Dave Owens, the same guy from whom I’d bought Lauren’s Macbook. He told me that on the very same day of our happy tail incident, he had spilled a drink into his new Macbook Pro. Coincidence? I think not!

The way I see it, either Dave has a quantum emotional attachment to his laptops that I can’t explain, or Annie traveled through time and space in order to spill his drink so that I would question my own sanity. I bet tissues were involved. Either way I’m looking at a $500-1000 repair that could have been avoided if only someone had listened to the dumb old man in the house.

As for Annie, she celebrated her Gotcha Day the way any happy ferret-dog would: by destroying expensive electronics. So on this, the week in which we celebrate Annie’s storied journey to our house two years ago, why not celebrate with us? Just take a glass of your favorite beverage and pour it right into your laptop’s keyboard. The more expensive the laptop, the more it will feel just like being at our house. Happy Gotcha Day Annie!

8 thoughts on “Fannie and the Macbook Pro”