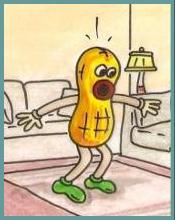 I am honored to have been asked by Ricman to write up a bio for Peenut Guy, the main character in a comic he’s been drawing. Peenut Guy can be seen on his webpage over at PeenutGuy.com, and for you guitar-lovers out there, the strip is posted daily on TheGearPage.net.

Who is Peenut Guy? He is you and me. He’s every one of us who’s had a bad day. He is every one of us that’s ever made a mistake or a poor decision. There is one defining characteristic of Peenut Guy that separates him from most of us though:

Peenut Guy never lets life get him down.

Every day, Peenut Guy has a great attitude, a fresh smile, and the conviction that life is good. And every day, the universe conspires against him in horrific, twisted, and hysterical ways. Peenut guy has been hit by a tractor trailer, has floated away into the sky, and has even had his car hit by a plane, though to be fair, he was braking to avoid hitting a dog at the time. Still, towing said airplane with his car probably wasn’t the smartest thing he’s ever done, but hey, we all make mistakes. 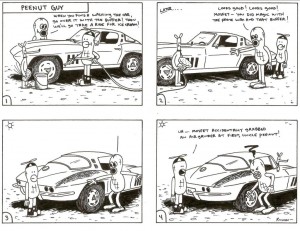 Peenut Guy once had his vintage collectable car explode after an unfortunate tire-filling incident, yet he still started the next day with an upbeat attitude. Upon further inspection, his attitude may be due to the fact that he has a seemingly endless supply of cherry vintage cars, all of which are immaculate classics. Well, they are at the start of the day anyhow. Take the beautiful ’64 Corvette (a personal favorite of mine). You see he let his nephew, Weenut, and and his dog, Mosfet wash the magnificent automobile. That car was stunning until Mosfet confused the buffer for the pnuematic grinder. That’s what you get for letting your dog polish your ‘vette, but hey, we all make mistakes. At least it wasn’t a ’63 split-window fastback! 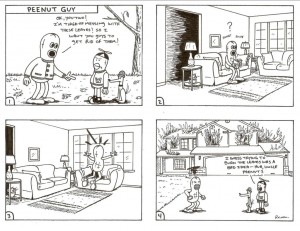 How Peenut Guy came to own so many magnificent vehicles is something of a mystery, as is the question of where he stores them all. We’ve seen easily a million dollars worth of vintage automobiles, though we’ve only ever seen a three-car garage attached to Peenut Guy’s relatively normal house. Of course the house was engulfed in flames at the time. He has been known to spend $1,000 on a cup of coffee, though as you might have guessed, he spilled it reaching for a napkin. That’s how Peenut guy relates to us. Sure we might not drop a thousand bucks on a cup of coffee, but if we did, we’d probably spill it anyway. His modest home aside, it’s clear that Peenut Guy has near infinite wealth, which is good, because a lot of those fine automobiles seem to get destroyed when he’s around.

Another clue to Peenut Guy’s seemingly infinite reserve of cash is the fact that he moonlights as a superhero with the cleverly crafted secret identity, Super Peenut. His lair has all the trimmings of the infinitely wealthy super hero, complete with a Peenutmobile, a Peenut-Sub, and all manor of weapons needed to defeat evil. Sadly, stupidity seems to be a bigger threat to our hero than any of “those men” they’re constantly after. 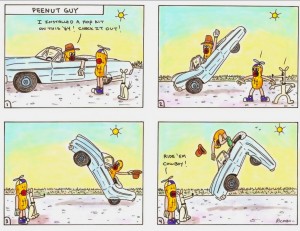 Not all of Peenut Guy’s adventures are a result of stupidity, poor decision making skills or strange characters. Sometimes poor Peenut Guy is simply the butt of a joke inflicted on him by his creator. Ever had a day when you felt like the universe was somehow conspiring against you? Ever wonder if those inexplicable things that happen to you might just be staged for the amusement of people watching from afar? Perhaps your life is nothing more than a comic strip. I know my life sure seems that way sometimes.

Peenut Guy does have a series of antagonists in his life. From the Hamburger Bully to the Deadbeatnik, to the trick wheel, none of them seem to confound our hero more than a simple hole. Why he sticks his fingers where they don’t belong is anyone’s guess, but rest assured, if there’s a finger-size hole about, there will be a Peenut-sized finger in it soon after his arrival. Usually, our hero will remain there, finger-in-hole, long into the night. Oh, and don’t even get me started about the the french horn. 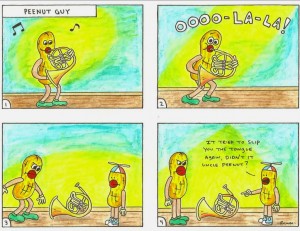 Still, with all the characters in his life who cause him pain, grief or embarrassment, Peenut Guy’s main nemesis is himself. Like most of us, his poor choices get him into trouble. Spilling a $3 coffee would only be annoying. Spilling a $1,000 coffee is utterly stupid, and for many of us, maybe just a little too close to our own reality. We really do all make mistakes, but Peenut Guy lets us laugh at ourselves while having someone else feel the pain.

If your days continuously unfold like a Peenut Guy comic strip, take heart that you’re probably amusing someone, somewhere, who likely feels better about themselves for your misfortunes. If, however, you’re seeing people who are shaped, or act like peanuts, please consult your neurologist.

Certainly, as a cartoon character (not to mention a talking peanut), Peenut Guy has problems that many of us will never face. Take the french horn I told you not to ask me about—who has these kinds of problems? Peenut Guy – that’s who. Still, after all the pain he suffers, all the cars that have been destroyed, and all the bad situations Weenut and Mosfet get him into, the next day he starts off with a smile and an upbeat attitude. I think a lot of us could learn from his example. I still wouldn’t let my dog wash my vintage ‘vette though. Even I wouldn’t make that mistake.

One thought on “Peenut Guy Revealed”