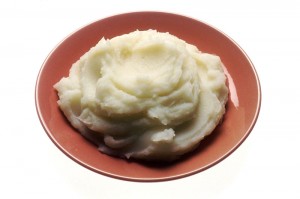 One day after coming home from somewhere I don’t recall, having done something unrelated, we were greeted by something we couldn’t believe: the wonder of snow inside our house.

I was pretty sure that snow wasn’t supposed to fall indoors – at least not in the summertime. Yet the floors were dusted with snow, as were the piano bench, the walls, the dog toys, and the ruined canister of bread crumbs resting at the top of the stairs.

As we looked through the freshly fallen “snow”, we found the remains of a large can of bread crumbs, a bag of Panko, which I’ve since learned are Japanese bread crumbs, and a completely destroyed box of instant mashed potatoes. The snow that had fallen so beautifully within our home was, in fact, nothing more than flakes of dehydrated mashed potatos. Suddenly my perception of the room had changed from tranquil winter snow-scape to potentially horrifying crime scene. If this was the first impression as we walked up the stairs, what else awaited us around the corner in the kitchen? I ignored my intense desire to run to the internet and learn why Japanese bread formed crumbs unique enough that it deserved its own name, and instead proceeded with caution into the next freshly powdered room. 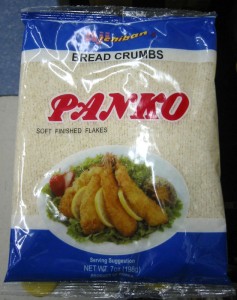 We walked into the kitchen, our feet making perfect footprints in the snow-like potato dust. I felt like the first explorer on a brave new world where it snowed mashed potato dust and bread crumbs enjoyed a sense of cultural diversity previously unfathomable to me. This is one small step for (a) man…

The kitchen cabinet was open, which was odd, because it had a child proof lock on it to keep ferret-dogs from accessing the contents. Our children had long ago outgrown the ability to be outsmarted by child-proof locks, but we had to reinstall one on the pantry cabinet door to keep Annie out. It had worked for a while too. Three days I think. Apparently child-proof was simply a marketing term that did not also mean ferret-dog-proof. Lesson learned.

Sitting in the living room was Annie. She was hiding, or at least she was doing what passes as hiding for 120 pounds of Newfoundland ferret-dog. Her body was concealed by the wall, as was half of her head. She watched us with her one visible eye from around the corner. Her head was hung low in the I did it and I’m sorry stance we had come to expect whenever we came home. She even had wet bread crumbs stuck to her face. With the Bread-Crumb Butter Bandit apprehended at the scene of the crime, her nose covered in evidence, this case appeared to be closed

Annie’s legal representation would like me to point out that at no time during the alleged incident, subsequent investigation or following cleanup, was any butter found to have been disturbed, overturned, consumed or licked in any way. They would also like me to inform you that the name Bread-Crumb Butter-Bandit is considered by them to be libelous and defamatory to their client. Further, their client denies any wrong doing and has no comment regarding the matter at this time. Thank you.

As I approached Annie, ready to deliver my You’re a bad dog and nobody likes you™ speech, I caught sight of Guinness, resident good dog and keeper of discipline in the house. Guinness was sitting on the rug in the living room, calmly licking the tops of his front legs as if to bathe himself after a leisurely walk in the park. As usual, he looked quite regal. He really is a beautiful dog I thought to myself as I looked at him. When Guinness saw me approaching, he stood up, and the incredible truth was revealed for all to see. 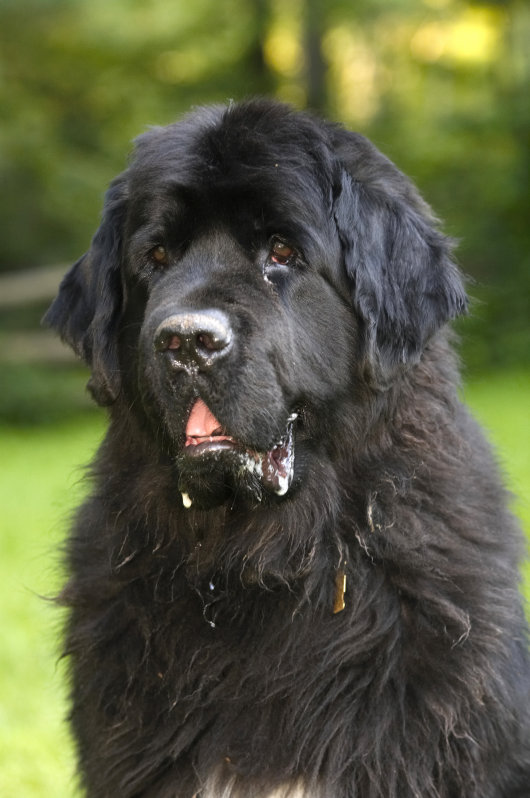 As anyone with a Newfoundland dog will tell you, they drool. Some drool a little, and some drool a lot. Guinness has always been a champion drooler. Guinness has a big chest, covered with lots of fur, and when he gets excited, the drool drips from his big lips onto his big chest where it settles, making a big crusty mess. As anyone with a big drooling beast like Guinness will tell you, if you don’t like it, then you shouldn’t have a Newfoundland. Actually I don’t think anyone likes it. Perhaps it would be more accurate to say, if it nauseates you to the point of gagging, perhaps you shouldn’t have a Newfoundland. At any rate, everything is bigger with a dog like Guinness, even the crusty messes. Disgusting, but true. And relevant.

From his chin down to his legs, it was apparent that Guinness had been drooling. A lot. Guinness drooling, even when extreme, is not newsworthy, nor is it cause for alarm on most days. When he gets hot, he drools. When he gets excited, he drools. When there’s food, he drools. If Annie drools, he drools. Guinness is a drooly boy who drools at the slightest provocation. This time though, it was pretty apparent why Guinness had been drooling. As Guinness sat up with his proud I’m a good boy posture, we saw clearly that from muzzle to paws, there was a big terrible mess on his chest. Yet this wasn’t just drool. He looked like he was wearing the chest piece from a medieval suit of armor. Armor made of… cheese?

As I got closer, he started to thump his tail to the beat of the I’m a good boy (after all) song that surely ran constantly in his head. His wagging tail stirred up the fresh powder on the floor into little clouds of  white dust while the true magnitude of what had happened sunk in. Guinness’s regal chest wasn’t covered in armor, nor was it covered with cheese. Guinness’s chest was completely covered in thick moist clumps of drool-caked mashed potatoes. He could not have been more pleased with himself. 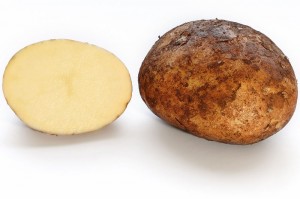 Instant mashed potatoes are basically potatoes that have been cooked, mashed and dehydrated. They become reconstituted when water or milk is added to them. Of course you don’t have to use water or milk. Anything wet would do. Say for example soda, coffee, gasoline, liquid plumber, kerosene or yes, even drool. Actually I would be willing to bet that liquid plumber would make for some pretty terrible mashed potatoes. They would smell awful, likely eat through most plastic serving bowls,  and would probably kill you after a few mouthfuls, so I’m going to have to recommend that Liquid Plumber not be used for making mashed potatoes. Kerosene and Gasoline, though, are still up for discussion.
The Association Against Idiots Making Food That Will Likely Kill You (TAAIMFTWLKY) would like me to inform you that, in fact, Kerosene and Gasoline are not suitable for making mashed potatoes. They would also like me to inform you that I am an idiot, and that following any of my recommendations regarding foodstuffs in this tale would likely cause sickness, the possible sudden urge to sing show tunes outside in the rain while wearing nothing but a pink bow tie and a clown nose, and ultimately death. TAAIMFTWLKY and this site are in no way liable if you are stupid enough to listen to this nonsense and make mashed potatoes with volatile petroleum products. Thank you.

A big floppy-lipped dog with overactive salivary glands eating instant mashed potato flakes would be an ugly thing. I imagine that the flakes of dried mashed potatoes that Guinness had lapped up would have become stuck to his drool-covered face and lips, absorbing the watery drool, then slowly transforming into wet sticky globs of mashed potatoes. I further imagine the taste and smell of the quickly reconstituting potato paste only fueled his hunger, thus accelerating the drool flow. As the globs grew in size, gravity would have caused the mashed drool-potato porridge to drip from his big face onto his big chest where it clumped together into a soft, thick coating of matted, hairy, lumpy, tuber glop armor. Mmm… hairy tuber glop.

Everyone in our house loves mashed potatoes, and Guinness is no exception. To satiate our constant lust for mashed potatoes, Lauren buys 15.3 ounce boxes of the stuff. According to the directions, one such box will make about 20 one-half cup servings. Now to make a pile of mashed potatoes that large, you need to add just over five cups of water, assuming you’re not brave enough to try something more exciting. Guinness may be a champion drooler, but I don’t think he secreted over a quart of drool. Of course had he gone for a drink after his snack, that would change things a bit. 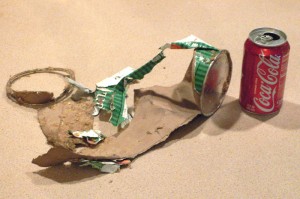 I imagine that Guinness licked up the mashed potatoes, growling at Annie the whole time since they were HIS mashed potatoes, even though she discovered them. After enjoying his fill, he then took a nice long drink from the water bowl. As he enjoyed his drink, and the water splashed and dripped onto his potato-flake covered chest, the slightly damp drool-soaked flakes absorbed the water and slowly started to swell into their fully reconstituted form. Given his completely encrusted chest, face and feet, and having seen what a mess he makes when drinks, I’d guess that my speculation was pretty accurate. He was covered with enough hairy mashed potatoes to serve the entire family at Thanksgiving dinner – relatives an all. Sure we would have to scrape the stuff off of his chest and apologize for the fur sticking out of the creamy, cold, lumpy stuff, but the stories about us would be epic! The legend of Guinness and the hairy tuber glop would be repeated for generations.

We’re guessing that Annie might have eaten the bread crumbs while Guinness dined on dehydrated tuber flakes. We don’t really know for sure though, as most of the evidence was consumed, save for what we had to hose off of Guinness’s chest and sweep from the floor. We do know that the entire large tube of bread crumbs was gone, as was the entire bag of Panko and the whole large box of instant mashed potatoes.

Annie never got the You’re a bad dog and nobody likes you™ speech, and Guinness never stopped believing that he was a good boy. That night after dinner we left the table hungry, since there were no mashed potatoes for us to enjoy. As much as we hate to waste food, we opted not to eat what we scraped off of Guinness’s chest. For the record, had there been any mashed potatoes, there would have been plenty of butter for a change.

6 thoughts on “Annie, Guinness and the Mashed Potatoes”