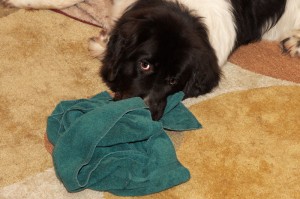 Annie has a towel problem. We’re not sure why, and we’re not sure how it started, but it’s pure Annie. If you’re like me, then you’re probably assuming that Annie’s towel problem would be as simple as a bad dog stealing towels. An overgrown puppy stealing stuff from the hamper is far too pedestrian an activity for Miss Annie, Ferret-Dog of Newfoundland. Annie has a far more peculiar problem, that I had to be shown first hand. I simply did not believe the stories my lovely wife and children were telling me. I had never seen Annie’s towel problem, and I have a pretty strong suspicion as to why that is. You see, I too have a towel problem.

I have a very sensitive sense of smell. I can smell things long before other people can, and people routinely act with disbelief when I tell them there is an aroma that they cannot detect. If we leave the towels out for more than a day or two, they start to smell funny to me so I put them in the hamper and take out fresh towels. Because of my nose, there are never any clean towels, or to be more accurate, there are never any towels that smell clean to me. Actually that’s only partially true. It would be entirely true if not for one simple fact: we have children.

The children, from what I can gather, can’t smell anything. I could take a towel, dip it in sulfur, pour six-month old milk on it, then use it to wash an angry skunk, and the kids would still put it right back up on the rack. That is, when and if they’re being scolded for leaving said towel on the floor. Otherwise Satan’s own sulfurous skunk-towel would just stay on the floor in a crumpled wet stinky heap. Why pick them up? We can just buy clean ones right?

When a towel falls on the floor, it should go in the hamper. Why? Because we have dogs. Dogs I might add, who are more tidy and meticulous than my children. If I get out of the shower and grab a towel to dry my face, I should not then become covered in dog hair! I’m honestly surprised that I’ve had to explain this more than once. My kids both get fabulously good grades on their report cards, yet they cannot seem to learn the simplest of skills relating to the proper disposition of towels.

My disgust at the notion of using a towel that’s been on the floor, coupled with the fact that I constantly find towels on the floor, leads me to put all the towels in the hamper. This then leads to the hamper being full of dirty towels that I then need to wash because no one else thinks there’s a towel problem. The way I see it there are two possibilities: either they’re all out to get me, or I’m going quietly mad. I’ve always assumed the later case to be more likely, so I started writing in order that I could go mad less quietly. It seems to be working since I can’t seem to get a moment’s peace these days. 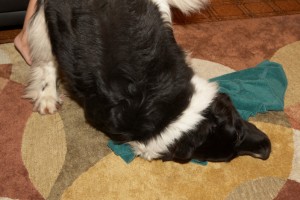 The kids tried to explain to me at dinner one night how Annie reacts when she finds a deliciously stinky towel on the floor. I refused to believe them, so Lauren went to the hamper, pulled out a recently used towel and threw it on the floor. Annie got up as if someone had thrown a steak on the floor, trotted over to the towel, then began her dance. Watching this display was both amusing and disturbing. It was unnatural. Like most happenings in our house, it was just plain weird.

Annie first sniffed the towel, then put a paw on it, then sniffed more deeply. She sniffed the way a connoisseur of fine wine might enjoy the delicate bouquet of a freshly opened vintage bottle. Actually it was more like a drunken sailor smelling a pretty girl’s hair after returning from six months at sea. Watching the way she enjoyed that towel left me feeling dirty, and somehow, a little bit ashamed for having watched. 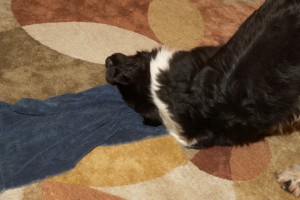 After a long deep sniff, she twisted her head, smacked it down sideways on the towel, and slowly rubbed the side of her face along its length. It was as if she had an itchy eye that could only be scratched with wet terrycloth. My hearing isn’t what it used to be thanks to years of loud music, but I could swear I heard her groan in a rather unpleasant fashion. It was like watching a train wreck — It was too disturbing to watch, but I couldn’t look away. It was an exhibition of fascinating towel fetishism the likes of which I’ve never seen, nor frankly care to see again. It was damn-near obscene the way she was enjoying that towel.

I simply had to get pictures. 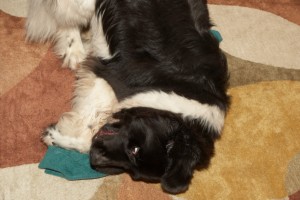 A week or so later, I had a fresh hamper full of towels. I had been home for two days during which nine towels, previously believed to be “clean enough”, had failed the sniff test. I brought them downstairs, got the camera, and invited Annie to join me. As I threw down the first towel, she again came trotting up, took a deep sniff, then did her psuedo-erotic face-rubbing half-roll onto the towel. It was hard to get good pictures because in her ecstasy, she kept flipping over so her back would face me. After maybe 30 seconds of towel-love, the excitement was gone, and the towel became just another plaything. At this point I took the towel and threw another one down. Deep sniff, half-roll and the fun started all over again. Guinness just sat in the corner watching, no doubt thinking the same thing I was thinking: That’s not right… 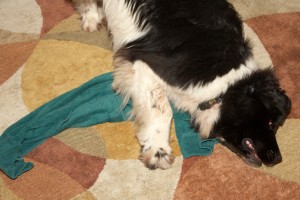 We have no idea what it is about a used towel that gets Annie so riled up.  Maybe she’s got an improperly wired brain and used towels are her own personal catnip. Maybe my wife and kids trained her to do this peculiar trick while I was out of town in order to further push me towards the precipice of madness. They all swear that Annie has exhibited this behavior since the day we got her. I find that hard to believe since she’s been with us for over a year and I had never witnessed her unnatural towel attraction. Then again, when I see a towel on the floor I put it away, but there’s no reason to beat a dead horse. I’m not bitter about the whole clean towel thing. Really I’m not.

The girls all swear that she’s done it forever, and when pushed, throw Virginia under the bus in an attempt to save their own skins. Virginia, you might remember, was the lovely woman who cared for Annie before we got her. While Virginia has admitted to seeing Annie standing on her dining room table, in an apparent effort to mimic the behavior of her cats, we have no reason to believe that she would have taught Annie to do such unspeakable things to towels.

For any canine anthropology students out there interested in writing their dissertation on the Abnormal Towel-Lust of the Canine Ferret-Dog, I should point out that Annie only exhibits this behavior on towels that have been used by humans after a shower. She is not impressed by dog towels, dish towels, paper towels, drool towels, beach towels, or even clean towels. For Annie to want to have her way with a towel, it must be used by any one of us, and only after a shower. Only then is it ripe for exploitation.

I think that Annie knows full well that even slightly used towels bug me. I think she’s also realizes that the kids will more than likely put towels back on the rack after they’ve been strewn carelessly on the floor. I further postulate that Annie finds these towels, rubs her face all over them, then watches the children hang them back up. She then waits patiently for me to take a shower so she can hear me scream obscenities as I rub dog hair all over my face when I get out of the shower.

It’s only paranoia if they’re really not out to get you. Right?

3 thoughts on “Annie and the Towels”