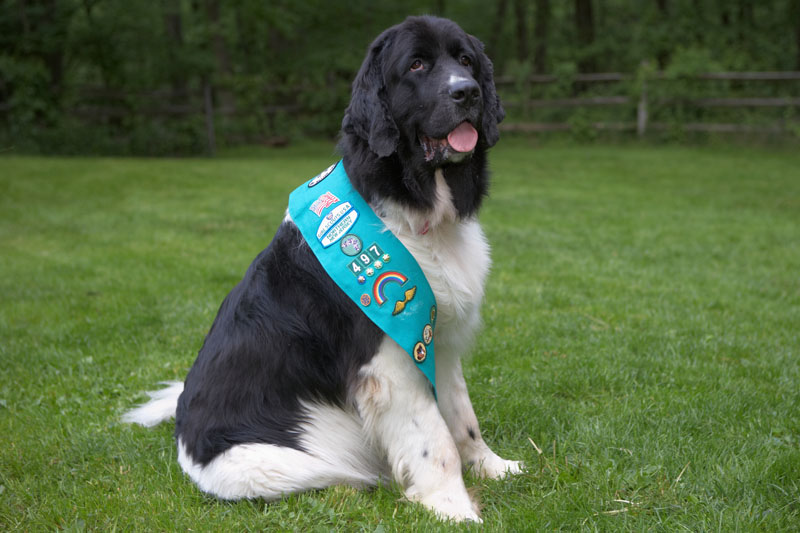 While I would love to have a story about Annie becoming a ceremonial member of the local Girl Scouts troop, this tale is, like Annie, far more complicated.

All of my girls are Girl Scouts. Lauren is even a Girl Scout leader. Annie though, is not a Girl Scout. I think perhaps she secretly wishes that she was, though who’s to know what really goes on in her ferret-dog brain.Once or twice a year the Girl Scouts have encampments. These full day events have thousands of Girl Scouts from the area converge to a camp somewhere in the area. I have no idea what they do there all day, since my presence would likely result in YouTube videos of me being tear-gassed by angry Girl Scout moms defending their troops from the only man in an all-girl zone. What I know about these events I have learned from observing the week-long preparations that occur preceding them.

For a week or so before the event, my wife and kids obsess about what they’ll be doing, what they should bring, who else will be going, and if they’ll be sleeping over. While some troops actually camp at the encampment, others go home after the roast-men-in-effigy bonfire. To be honest, the ceremonial roasting of the man-doll is only a rumor. I have no proof that it actually happens other than veiled whispers from the men who weren’t invited and were to afraid to go see for themselves.

One of the things that the kids really enjoy about these encampments is the tradition of SWAPs. Each kid or troop makes little trinkets that have safety pins on them. These trinkets are then pinned to the girl’s hats or a lanyard around their necks. 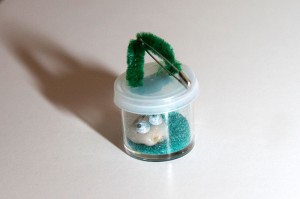 During the course of the encampment, the girls swap these trinkets through an elaborate protocol of courtesy that involves, among other things, not refusing the swap, er… of the SWAPs. From what I’ve been told, if one Girl Scout expresses interest in another’s SWAP, then etiquette dictates that a swap should ensue. Thus if a SWAP is especially loved, it should be hidden so that it cannot be seen, and thus admired. This, it would seem to me, would result in only the lame SWAPs being swapped, which makes no sense to me. But then I’m just a dumb old man, ignorant – and yes, slightly afraid – of the verb confusing methods employed by Girl Scout estrogen army.

Using the word swap as a noun in this tale resulted in a marked increase of my Advil consumption over the past few days. Then my nine-year-old informed me that SWAP was an acronym for Share With A Pal. Still, the act of the swap itself, in which SWAPs are swapped for other SWAPs unless the swap is denied because the SWAP being swapped is special makes my head hurt.

Many of the SWAPs are pretty simple. A couple of pipe cleaners twisted together with some googly eyes glued on makes a fine caterpillar for example. Some of these SWAPs are pretty clever. This year the girls in our troop made little pet rocks in a small cylindrical tank that were adorable. These became the hit of the event this year. The one pictured is named Rocky if you were curious, and yes, he was too precious a SWAP to have been swapped.

One of the other SWAPs that the girls made this year were pretty simple. These SWAPs were comprised of a small zip-lock bag, with little gold hearts and a Hershey’s kiss inside. Simple and delicious. Not a keep-sake SWAP, but fun none-the-less. With hundreds of SWAPs having been made, some had to be quick and easy. You might argue that making SWAPs containing perishable food items would be a bad idea. You would be right, but neither melting under the hot sun nor spoiling over time makes for an interesting tale. 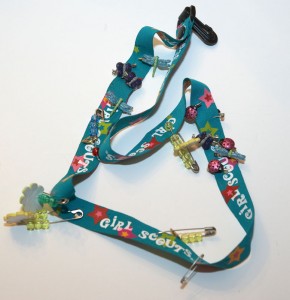 Once the SWAPs were all made and attached, the lanyards were put away and the next task undertaken. Now, as anyone with children will tell you, the phrase “put away” doesn’t mean anything even close to “properly stored in a safe place where it belongs”. It usually means something closer to “thrown somewhere out of site”. I find it interesting that to a nine-year-old, the floor in another room is as good a place to store things as any other. This case, as you can imagine, was no different.

After the swap assembly was completed and the crafty bits all put away (properly, by Lauren), we all went out to do something unrelated to the story at hand. It doesn’t matter where we went or what we did. What matters is that we came home.

After our return, Lauren went into the girls room, which is a feat of bravery on the best of days. There she found a sight of horror unlike any she had seen before. The floor was littered with little zip lock bags, all smeared with chocolate. Little gold hearts peaked through the mess, but what was most troublesome was the open safety pins that were all over the floor. 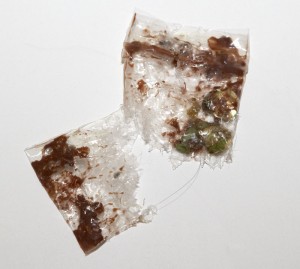 Somehow, Ferret the Wonder Dog had come into the girl’s room, found the lanyard full of chocolate treats, then sat for a spell and feasted. Amazingly, she managed to open the safety pins, but the complexity of the zip lock bags eluded her. I can only imagine her sitting there while she tried to figure out the plastic zippers thinking Curse my thumbless paws! Luckily she could just gnaw on the bags and lick the chocolate out from the holes in the bag. She didn’t seem to have consumed anything but chocolate. How she managed to do this without having 20 safety pins stuck in her tongue is a mystery we’re likely never to solve, but at least we didn’t have to take her to the vet.

As I settled in to a nice lecture to the girls about leaving food items on the floor where criminally insane ferret-dogs can get to them, their pleas of innocence led me to a horrible truth. The girls had nothing to do with the haphazard placement of the lanyards. They were not the ones to put the lanyards away. It was Lauren who had put them on the floor!

Suddenly I found myself in a rare situation. Annie had been bad, but it wasn’t her fault. The Lanyard was left on the floor where she could get to them, but the kids hadn’t done it, so it wasn’t their fault either. Lauren had not only left the lanyards on the floor, but she had left the door to the room open a well. Annie always has motive by nature of the fact that she is, well, Annie. Given her criminal tendencies, providing the means and opportunity was just too much for her to ignore. 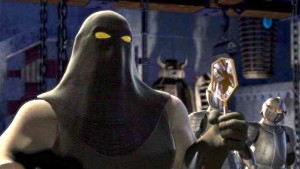 Lauren was the root cause, but blaming Mommy is akin to telling the queen that her dress makes her look fat. None of us had any desire to spend time in the dungeon under the watchful eye of Thelonious the executioner, so I’m afraid that this tale is devoid of a satisfying ending. That is unless you’re satisfied knowing that pretty much nothing has changed in our house since the last chocolate incident.
More about: [ Guild Guitars ][ Dogs ][ Cozy Tales ][ Ferret-Dog ]

One thought on “Annie the Girl Scout”