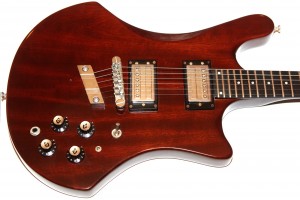 Ahh, the Guild S300. Ain’t nothin’ else quite like it. Of course, that’s mostly because it’s pretty odd looking, but ask almost anyone who’s owned one and they’ll tell you how much it rocks. I’ve owned four and yes, they all rocked. Hard.

A Guild S300A-D was my only guitar for over 20 years and as a result I have a soft spot for these odd-looking beasts, so when the opportunity presented itself for me to score a 1981 Guild S300, I jumped on it. I needed to own this 1981 S300 both because I was without an S300 at the time and because I wanted to write about one of my favorite guitars which I could only do properly with one in hand. As luck would have it, the one that landed in my lap happened to be in almost like-new condition. Let’s take a look.