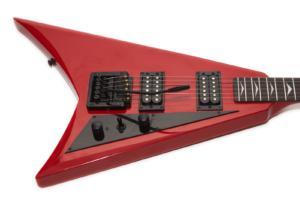 In a departure from my normal Guild reviews, today’s writeup is about the Burnside Lance, model BE100R.

While not strictly speaking a Guild, Burnside was a company that operated under the Guild umbrella so that Guild could sell less expensive import guitars along with their US-made brethren. Some companies (Jackson comes to mind) managed to produce some stellar import guitars, so let’s see if this Burnside Lance can compare with the US-made Guilds from the 1980s.