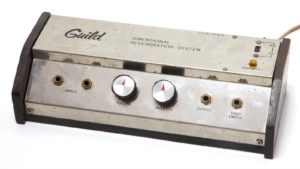 I bought this Guild Dimensional Reverberation System when it popped up for sale a couple of years ago figuring that I’d never seen one before so it might be fun to research and write about. I’m not sure “fun” was the right expectation because after moving it around on my desk for over a year, well, read on and see for yourself.

END_OF_DOCUMENT_TOKEN_TO_BE_REPLACED 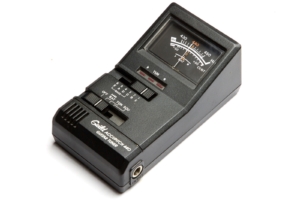 It’s no secret that I have a penchant for rare Guild items, including but not limited to stuff that other people just wouldn’t buy. Take this Guild-branded quartz tuner from the early 1980s, for example. Hey, at least I didn’t buy the one that was listed for $75!

I thought it would be fun to write up what I could about this relic from a time before CDs when Star Trek II: The Wrath of Khan and E.T. the Extra-Terrestrial were both in theaters.

END_OF_DOCUMENT_TOKEN_TO_BE_REPLACED 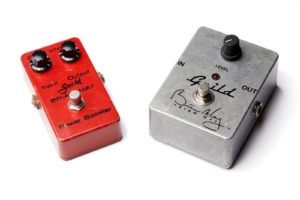 Guild famously made Brian May signature guitars, first in the mid 1980s (they weren’t quite good enough for Brian May purists even if Brian himself did use one in a music video), and then again in the 1990s with better results. Guild also released treble booster pedals to accompany those guitars, the red one on the left being from the 1980s, and the silver one on the right from the 1990s, both of which are a bit uncommon. In this longer-than-normal article I tear them both apart in order to let you know what the deal is with these rare pedals.  END_OF_DOCUMENT_TOKEN_TO_BE_REPLACED