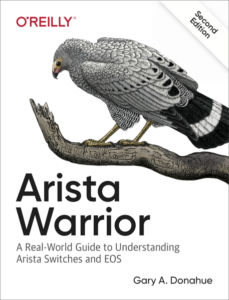 The long wait is over, and I’m happy to announce that the second edition of Arista Warrior is in the production phase. What does that mean? It means that the book is done and the only thing really left for me to do is approve copy-edits and quality control notes. So far as I’m aware, and if everything goes according to plan, the book should be hitting your favorite bookstore shelves, websites, and e-readers by mid to late June.

To give you a glimpse into the new edition, here are my notes from the preface about what’s changed. Remember, the first edition was published in October of 2012, so there’s over six years of advancement to cover which is part of why it took so damn long to finish. Well, that and having a job, family, dogs, guitars, and a life, all of which are excuses further compounded by my apparent compulsion to miss book deadlines.

My primary goals in writing the second edition were as follows:

Some chapters from the first edition have been removed due to either the topics being molded into other chapters, the content being dated, or there simply not being space for a topic that I considered cut-worthy. Chapters that have been removed include:

Some of those chapters, like Access-Lists, Sflow, and QoS got cut because they’re pretty generic and I felt that they were easily learned from the EOS manual. I also felt that they didn’t really contribute to how Arista is different, so I removed them in favor of the new chapters. If you’d like to read about these topics, the first edition of Arista Warrior is always available in soft copy format from O’Reilly.

What’s more exciting is the fact that I’ve added the following chapters to the second edition (in no alphabetical order): 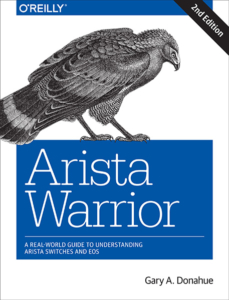 Thanks to everyone who’s helped along the way, and to those who did, make sure to look for your names as a thank you in the preface of Arista Warrior, Second Edition! [Edit – May 13th, 2019]

O’Reilly has revamped their whole image and the previous cover that I had included in this post (shown here) has been replaced by the new cover you see at the top. This wouldn’t have happened if I’d just been able to deliver according to the original deadlines since that’s where the original cover came from, so any confusion is entirely my fault. Let me know what you think of the new cover!