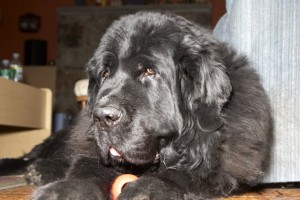 As I pulled into the driveway from my long commute, I saw my Cozy sitting in the yard waiting for me like she always did. I parked the car and got out ready for my greeting, but there was no boisterous dog at the fence. My Cozy always ran up to the fence with a joyous bark when I came home. Always.

I went out and sat with her in the yard, and she thumped her tail a couple of times as I approached. She was lethargic, and had that same I’m sick Daddy, please help me look on her face that she did when I rushed her to the vet. She didn’t seemed distressed this time; she just didn’t seem to have any energy. When I went inside she followed me in with her head and tail hung low. It was an obvious effort for her to move.

That night Lauren made shepherd’s pie, a favorite of ours. Though I finished my helping, Cozy licked hers a couple of times, had a drink, and then went back to lying on the floor. Since Cozy was an eating machine that would instantly devour anything that even resembled food, when she turned her nose up at such a treat there had to be something seriously wrong.

That night she slept fine. In fact all she seemed to want to do was sleep. There was no pacing, no whining, and none of the other behaviors that had worried me so on the scary night when I thought she was bloating. I, however, did not sleep well at all. I kept getting up to check on my Cozy to make sure that she was still breathing.

The next day we took Cozy to our local vet. Dr. Fritz, Newf doctor extraordinaire, wasn’t in, so we saw another vet who was pleasant enough, but he was no Harry Fritz. He took Cozy into the back room to x-ray her. This was the same room where Cozy had fought to stay with me years ago, so I anticipated a scene but there was no fuss from Cozy this time. She just plodded along with him and left me to wait. That alone spoke volumes.

He came back looking very concerned. The first thing that hit me was Cozy’s weight. She was a scant 137 pounds, and for a dog who always weighed between 155 and 160, that was a pretty big drop. The bigger problem according to him was that Cozy had hemolytic anemia. I had no idea what that meant, but I knew that anemia meant a low red blood count which would explain her weakness. He said the X-rays didn’t look like tumors, but he also said they didn’t look good, and recommended that I take her to the emergency clinic.

As I started to say that I would make an appointment, he interrupted me to tell me that I should take her now. He then proceeded to continue to talk endlessly about how serious Cozy’s condition was and that we should take her in now, and that she would be best served at the other facility and… All I could do was stare at him blankly while he prattled on. Lauren finally caught the eye of one of the vet techs who helped us escape with a simple “You guys should get going.” 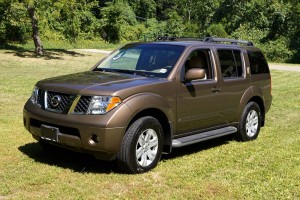 We had upgraded the Subaru to a Nissan Pathfinder, and I had to lift Cozy into the back of the truck since it was so high. I dropped Lauren and the girls off at home and started the hour-long drive to the veterinary hospital in Fairfield. Cozy just lay in the back of the truck the whole way, not looking around or even lifting her head. I talked to her just as I did every other time I was alone with her in the car, but there was no indication that she heard me.

Cozy and I waited in the same lobby that I had waited in during the early morning bloat scare six months earlier, and after about 20 minutes we were greeted by a very nice male vet in his early thirties who took Cozy away from me to perform some tests. Again, Cozy just went off with him, resigned to whatever fate might await her, her head and tail drooping as she walked. I went back to my chair and tried to maintain whatever sort of calm I had wrapped around myself in order to keep from collapsing in weeping fits of despair.

After about a half hour he came back and told me I could see my Cozy and led me into a small room where she was resting. Her front leg had been shaved as had part of her belly, though she didn’t seem to care. She thumped her tail for me which made me smile, but she didn’t get up. She seemed just as exhausted as she had the night before.

The vet was very nice as he explained to me that Cozy’s belly was filled with blood because her entire abdomen was riddled with tumors that were bleeding into her abdomen. This was causing her anemia, her discomfort, and her lethargy. He told me that while there were numerous things that they could do for her, those things would likely only worsen her quality of life and cause us undue heartache and expense.

As I tried to absorb everything he was saying, I could feel the walls of calm slipping away. He said that he didn’t expect her to live more than a few days, and the best thing we could do was to bring her home and keep her happy. If we decided that it was time to let her go, we could call and he would make sure we didn’t have to wait. He gave me some information, told me I could stay in the room for as long as I liked, then politely excused himself.

As I leaned down to hug my Cozy, she looked up at me with those big, brown, soulful eyes. The message in those eyes was clear: Now you understand. She had been trying to tell me for months that she was dying and I was too thick to understand, but now I knew the devastating truth. I am convinced that she knew how bad it was, and somehow also that there was nothing we could do. She had been expending some energy to get me to understand, and now that I did, she could relax a little. I smooshed my face into hers and told her that I loved her. We then got up slowly and with the need to rush behind us, we walked back to pay our bill.

I don’t remember much after paying the bill. I know I had to pick my Cozy up and put her in the truck, I know I called Lauren to tell her, and I know I sat sobbing in the truck for far too long while Cozy lay in the back listening, unable to help me this time. I felt alone, like the only friend I’d ever had was dying before my eyes and there was nothing I could do to stop it.

I felt myself tumbling into a dark chasm. At the bottom was a terrible land where neither dogs nor fathers lived forever, a land where a monstrous crab named Cancer took from me the ones I loved whenever he felt the whim. I had spent a lifetime hiding from this place and its terrible horror, but the terrible crab had found me and dragged me back into the abyss with sudden unfeeling ferocity.

That night we told the kids what was happening. They were only four and six at the time, so they didn’t really grasp the depth of the situation but they understood that Cozy would soon die so they both gave her lots of love. The scene was sweet, but it pained me to watch because I knew there was a good chance that they might forget her as they grew into adulthood. 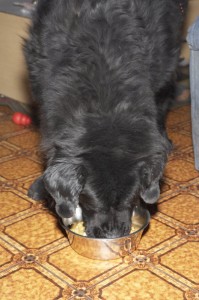 Lauren cooked Cozy some liver that night. We had read that raw liver could be good for anemia, so we offered it to her uncooked, but Cozy being Cozy turned her nose up at it. Once we cooked it for her, though, she ate it. We’re not sure if she actually wanted it or if she just refused to let Daisy get it all, but either way were were thrilled that she had eaten. In fact, having the normally voracious Cozy turn her nose up at dinner had been such an eye-opener for us that we now rejoiced every time she ate anything. We were so excited that she ate that we took pictures to celebrate the occasion.

After dinner I took the gate down from my office so that Cozy could come and lie with me while I searched the Internet for information. She was happy to be closer to me, and she lay quietly as I typed. As the night wore on, Lauren and I would sit with her on the floor and give her lots of love,  both of us sobbing as we recalled our Cozy coming home for the first time, how she greeted both of our children when they came home from the hospital, and how we couldn’t believe this was happening. We took some pictures with her, brushed her in the office (which made an unholy mess), and basically doted on her for hours. Cozy soaked it all up of course, but she was still so very weak. 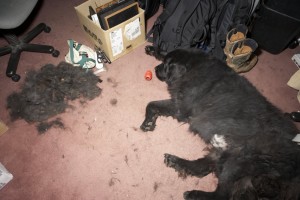 Her Kong had always made her happy, so I found it and brought it to her. She perked up a bit and sat with it between her paws. I have pictures of her sleeping on the floor that night with it in her mouth like a baby with a pacifier. She was very tired, but seemed to be truly resting for the first time in days.

She had finally made me understand, and now she could rest.