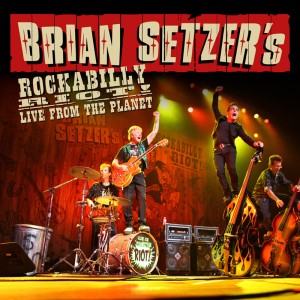 It’s no secret to people who know me that Brian Setzer is my favorite guitarist. Aprently it’s no secret to Surfdog Records either, because out of the blue, I received an email inviting me to review an advanced copy of Brian’s latest album, Brian Setzer’s Rockabilliy Riot! Live From the Planet. Naturally I said, Hell Yes!, because as much as I like Brian Setzer’s music, I like free stuff even more. I guess they figured out that I was a fan after discovering my fairly well-documented obsession with Brian’s tone. Whatever the reason, I’m happy to write up my thoughts on this record.

This album is a collection of recordings from the recent (2011-2012) Rockabilly Riot tour. If you’re not up to date on Brian’s touring habits, he sometimes tours with the big brass band, and sometimes tours with a smaller rockabilly band. This time, he toured the smaller band comprised of two drummers and two standup bassists. Hell, I’m not going to explain all that when I can just quote the details from the official BrianSetzer.com website, so here is that quote which also explains the Live from the Planet title:

Brian Setzer and his Rockabilly Riot are releasing a special live record this fall, titled “Live From The Planet!” The “Rockabilly Riot!” tour saw Setzer rock four different continents; Europe, North America, Japan, and Australia, for an overcharged and thrilling attack of American rock ‘n’ roll. The lineup includes two slappin’ stand-up bassists each bringing some extra thump to the party, two drummers, one being none other than Stray Cat Slim Jim Phantom, and a classic boogie-woogie piano that plays so well with Setzer’s rockin’ riffs. “Live From The Planet” captures the best songs from every country, filled with Brian’s hits and originals and a few favorite covers! Coming September 4!!

Now I’ll be the first to admit that I don’t usually like live albums. I love listening to music, but if I’m going to listen to live music, I prefer it to be, well,  live. In this case, though, I never got to see the Rockabilly Riot tour because I couldn’t manage to be anywhere near a planned concert, so I kind of dug hearing these recordings.

I’m a bit of an audiophile snob, but only when it comes to headphones, since that’s the way I listen to music unless I’m in the car. Most of the time I listened to this recording from the uncompressed .wav files sent from Surfdog Records using VLC on my Macbook Pro using Etymotic ER4p headphones. At home, I listened using my Mac Pro using VLC connected to my home-brewed Pimeta headphone amp powering a pair of Sennheiser HD-600 cans. 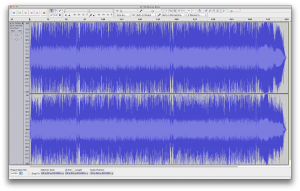 I think one of the reasons I don’t like live recordings is because I grew up in the ’70s and ’80s, during which I listened to more than a few live recordings that truly sucked. Thankfully, that’s not the case with Live from the Planet.

In short, this album sounds great. I didn’t hear over-compression artifacts common in so many of todays recordings. Over-compression makes listening to music exhausting, or even just plain uncomfortable, but had no listener fatigue with this record, even after listening multiple times while writing this review. To the right, you can click on the Audacity plot of track 2 – ’49 Mercury Blues. This shows a song that was pushed to the maximum volume with very little clipping. I’ve listened to other artist’s recordings that flat-out hurt my ears due to the excessive compression and resulting terrible sound quality. Kudos to Surfdog and Brian Setzer for not pushing these recordings too far. 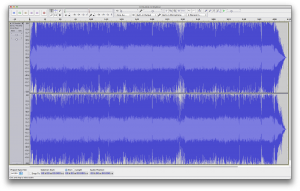 About the hottest song (volume-wise) on the album is track 10 – Rumble in Brighton, which is shown in the second plot. This song really pushes the envelope, and if I listen with a hyper-critical ear, I can convince myself that there might be some clipping, but I’m having so much fun listening to the song that I really forgot to be a pain in the ass reviewer and just reveled in the energy of a master band playing a great song. If you have to make a point to listen for bad audio, chances are that it’s not bad audio.

Having seen The Brian Sezter Orchestra in concert, I can attest that his tone in person is nothing short of magical. While some of the presence felt while standing in front of a master playing an old Gretsch through a ’63 Fender Bassman just can’t be captured, the tone and feel of Brian’s guitar is well transferred on this recording. Headphones don’t really translate the thump of a rockin’ bass, and I didn’t have a chance to crank it at home through my big speakers and subwoofer. Through headphones, I thought the audio was well balanced. The “chimey” nature of Brian’s guitar is evident, as is the feel and energy of both the basses and drums.

This album is filled guitar-rocking goodness. Here’s the track list:

One of my favorite Setzer tunes, track 2 – ’49 Mercury Blues is delivered with the small rockabilly band which results in a bit of a more raw, straight-on rock type of sound than that heard when he plays it with the big band. It’s a testament to the song and Brian’s skill that the songs sounds great either way.

The opening guitar solo to track 4 – Drive like Lightning (Crash Like Thunder) includes a little snippet of the theme from The Munsters that had me scrambling to find out what the melody was from, and then wishing once again that I had even half of the musical ability that Brian Setzer has.

The rockabilly goodness just pours out of my headphones during track 5 – 8-Track, though the yodelling in the middle sort of woke me up from my musical revery. Still, he makes it work, and I loved every bit of it. Meanwhile, track 6 – Slow Down – Folsom Prison Blues delivers a healthy dose of Jonny Cash with a bit of a upbeat  guitar work thrown in for good measure.

Track 7 – Put your Cat Clothes On makes it challenging to sit in Starbucks while writing, because the urge to get up and dance is overwhelming during such a high-energy song. And let me tell you – I don’t dance. Ever. My foot sure was a-tapin’ though.

Track 9 – Pickpocket really show off Brian’s multiple-genre mastery of picking techniques that I wish I could master.

There really isn’t a bad song on this album, which shouldn’t be surprising since he’s playing mostly songs from his vast catalogue to a live audience that paid to hear the good stuff.

This album isn’t groundbreaking, but live albums rarely are. Instead, it delivers what it promises, which is an escape from the pains of every day life in the form of some fun, energetic music. This album is filled with Brian Setzer in all his Rockabilly glory, playing his heart out with a rockin’ band, like he does at every show. If you like Brian’s music, or rockabilly, or even just energetic good-old-fashioned Rock ‘n Roll, then this album will not disappoint.

One thought on “Brian Setzer’s Rockabilly Riot! Live From the Planet – Review”