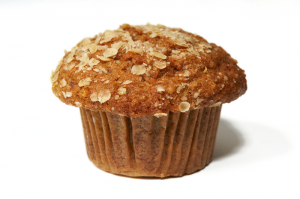 Being the quirky, pain-in-the-ass, control freak that I am, I will not settle for just any bran muffins. The bran muffins I demand are made by our local supermarket chain, ShopRite. I should also mention that of all the ShopRites I’ve ever visited, only one makes bran muffins the way I like them. Did I mention that I’m a quirky control-freak who is also a pain-in-the-ass? Check with my wife. She will confirm every last bit of that last compound-adjective-laden sentence.

You see, most ShopRites around here have a bakery, and most of them make bran muffins, but they pollute them with the most disgusting manner of dried fruit. That’s right, I’m referring to those vile little nuggets of nastiness called raisins.

Raisins used to be dirty old grapes that fell off the vine and sat rotting in the sun. That is until some bright farmer saw them and thought, “Hey, I bet I could make a tidy profit selling rotten old grapes to unsuspecting consumers!” Even after they fell to the ground in miserable failure, the mice wouldn’t eat the nasty little things. That alone should make it obvious that raisins are disgusting, because mice will eat anything. Sure, I made that part about the mice up, but that doesn’t detract from the fact that I loath raisins. Nasty little wrinkled grape failures, every one of ’em.

Anyway, the one ShopRite near our house sells the most perfect, moist and delicious bran muffins ever baked, properly devoid of nasty raisins, and carefully prepared fresh on weeks when I’m not there to buy them. On the rare occasion that I wander into this particular ShopRite and they do have the muffins I crave, I buy them without question, hesitation, or concern for price. Sometimes I buy two of the muffin six-packs, since the GADlings have developed a taste for the perfect raisnonless bran muffin as well, and as anyone who knows me will attest, I hate to share—especially when it comes to food.

So it was, on this fine November day, when I rushed into ShopRite to buy supplies for one of my many business trips, that I spied a shelf full of freshly baked muffins. To my delight, there was a single six-pack of bran muffins sans raisins, so I bought it and went about my regularly scheduling shopping.

I’m not ashamed to admit that I sat in my car outside the ShopRite and quickly devoured two delicious raisin-free bran muffins. Since I had to fly later in the day, I knew that whatever muffins I left would be consumed by the ravenous GADlings. I simply took advantage of the fact that I was alone with my muffins and enjoyed them in peace. OK, so I ate one while walking to the car too, but it had been so long since I’d enjoyed the sweet taste of a moist perfect muffin. I felt I deserved a pre-car muffin, and for that, I am not ashamed.

After my gluttonous ingestion of three muffins in and around the car, I decided that I would tell the kids that they could have one each, which meant I could have one more when I got home. That is, if it lasted that long. On the ride home I rationalized how they could split one instead, which would leave two for me. Of course I’d have to eat another to limit the arguing that would ensue when they saw three, but we do what we must when we don’t like to share. For the record, I settled on letting them each have one, because I’m a Hell of a guy. I was also getting a bit nauseous from eating so many muffins. 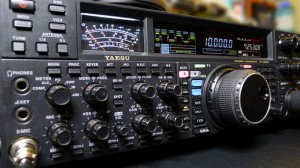 After I got home, I put my bags on my suitcase, and went to check on my laundry. It still had twenty minutes to go, so I decided to bring in my off-center dipole HF antenna, which brings me to secret number two: I am a licensed ham radio operator.

Yes, it’s true. If you’ve ever wondered just how far down the nerd path I’ve travelled, let there be no more doubt. Not only have I been a licensed ham since 1995 (a mere three months before our wedding), I also just upgraded my license from Technician class to General, thus allowing me to transmit on the coveted high frequency bands, colloquially known as shortwave. 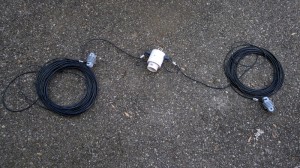 As a new member of the nerd elite, I set myself up with a wonderful new radio, but even the best radio is useless without the proper antenna. Naturally, I opted for a multi-band off-center-fed dipole. Since I know you’re wondering, a dipole is essentially just two long wires of equal length. There’s a bunch of math involved to determine how long the wires should be, but nothing kills a story like math, so I’ll skip over that part. Suffice to say, an off-center-fed dipole has one wire longer than the other, but what’s really important is that in my case, I’m talking about almost 140 feet of wire.

As I’m sure you’re aware, a properly installed dipole needs to be strung up at least thirty five feet in the air. Naturally, being more impatient than I am nerdy, I strung mine out on the front lawn until I could order the requisite rope and pulleys to string it up in the trees. The only problem with this arrangement was the fact that I’d connected the antenna with a coax feedline (nerd-speak for cable) through an open window in my office. I couldn’t leave it like that while I was away, so I went outside to coil up the 140 foot wire that was my conduit to shortwave listening nirvana.

When I’d put the antenna out on the lawn, I’d had the help of Colleen (GADling #2). She was a tremendous helper who not only added a great deal of glamour and panache to the event, but also cut the deployment time roughly in half. There aren’t many hams out there who would strike a Saturday Night Fever pose while installing the short leg of a dipole antenna, though I’m not exactly sure how that benefited the project. At any rate, with Colleen’s help, it took us all of five minutes to lay the antenna out on the lawn.

When I went out to retrieve the antenna, I coiled it up, secured each of the two coils with velcro, carefully covered the ends, and stored it in the garage. Total time spent: approximately six minutes. I may not have the grace and fluidity of a GADling, but I’m a much more efficient worker. I was not outside for more than six minutes. What could possibly happen in six minutes? 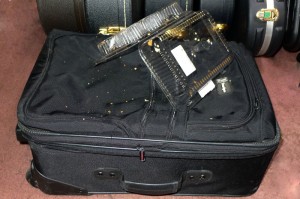 When I went back into the house, I saw Annie the ferret-dog looking guilty in the family room. That’s when I suspected the horrible truth. The muffins! The tasty perfect raisinless muffins! I ran into the office, and found the sickening remains of muffin plunder.

There was my suitcase, and on top, the empty muffin container. No muffins! There were no signs of forced entry, no sign of a struggle, and nothing to indicate that there had ever been muffins – except for the obviously empty muffin tray and some crumbs. She had even eaten the wrappers.

I’m not proud of what I said to Annie that day while I wagged an enraged finger at her. Seriously, my finger was angry! That freaking dog ate my muffins! My perfectly moist raisinless muffins that I’d brought home to share! Not only was my generosity now wasted, but I was struck by the fact that my generosity had cost me the remaining muffins. I could have eaten another one in the car, but instead, they were wasted in the most wasteful way possible. That damn dog not only ate some of my delicious muffins – she had eaten half of them!  I felt a sudden urge to list the damn dog on Craigslist. Perhaps with a heading like, “For Sale – Demented Ferret-Dog hybrid with a penchant for eating the master’s muffins.” I imagine that would garner attention, though somehow, I don’t think it would attract the kind of people I’d be looking for. 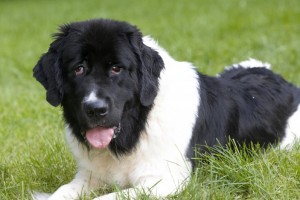 I’m always telling the kids not to leave food out because it will attract vermin. Sure, I’m an idiot for leaving food out where this beast could reach it. I’m doubly stupid, because I’ve lived with the filthy beast for years and should have seen this coming. But dammit, those muffins were mine! I guess it’s no secret that I’m an idiot.

I bet she wouldn’t have eaten the muffins if they’d contained raisins.

6 thoughts on “Annie and the Antenna Muffins”