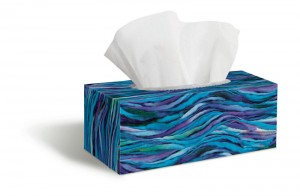 Somehow, a box of tissues wound up on the floor. In a normal house, this would be a virtual non-event. Someone would walk by, see them, pick them up, and put them away. Luckily for you, we live in a house where people don’t seem bothered by boxes of tissues in odd places. I’d be wiling to bet that I could glue an inverted box of tissues to the living room ceiling and not hear a word about it for months. Unless someone sneezed, in which case I’d be asked where the tissues were. In such a situation I might reply with a single finger pointed up, resulting in wonder and excitement from my children who would have completely missed the point of the exercise.

This time though, the tissues were left on the floor where we all stepped over them for days. One day something changed, at which point I stopped and stared, trying to figure out what had caught my eye. Then it struck me; the tissues were suddenly outside the box.

I may not be the sharpest marble in the bag… or something… but I knew that the tissues should either be in the box, or in the trash. In this case, the box, which seemed to be in the same position that it was the night before, had vomited up all it’s contents into a neat pile. Unless there was a simpler explanation, this was a open-and-shut case of tissue-box nausea. But what could be more plausible than inanimate objects vomiting lotion-infused paper products?

Whenever my reality is brought into question, I immediately blame Annie. This habit has served me well at home, though it repeatedly fails me at work. In my experience, blaming system-wide network outages on a dog garners little respect from today’s corporate Vice Presidents. Luckily I was home where small-minded executives have no influence in the outcome of my tales, so I felt safe blaming the she-beast

I thought on the matter for a time, feeling like Whinie the Pooh trying to think a particularly difficult thought, when a plausible scenario popped into my head. I imagined Annie walking past the box of tissues every day without a second glance. Then, one day, she decided that she would grab the white puffy fabric sticking out of the box. She grabbed a tissue, then pulled away, expecting the box to come with her. Much to her surprise, the box stayed, as did the tissue, even though she had the tissue in her mouth. Confused, she dropped the tissue so that she could grab the tissue, at which point the tissue again remained, even though she had removed it. Synapses fired, her head tilted, and the fun began.

It turns out that the specific type of space-time rupture encountered by Annie has an inherent limit of 124 tissues, given the discovery of a new, unused box. Finally the fuel was exhausted and the cause-effect relationship once again asserted itself in the form of an empty cardboard box. I imagine that Annie, shocked by the end of the inter-dimensional rift, stood and stared for a bit, hoping for another tissue to appear. I suppose that when another tissue failed to appear, she snorted her displeasure at the normal order of things, got bored and walked away, leaving the pile of tissues for someone else to pick up. Temporal rifts are interesting and all, but when it comes to cleaning up after them, she’d rather leave that to someone with thumbs.

With reality once again the order of the day, the tissue box disappeared.  No one seemed to know what happened to the box. I guess we just all assumed that Mommy had cleaned it up. For all we know the box could be floating in space somewhere, waiting for a hyper-intelligent being to discover its secrets. Perhaps the box held wonders the likes of which the greatest human minds have only imagined. Only Annie knows for sure, and she’s not talking. I suppose it’s equally possible that Lauren unceremoniously removed the box of secrets along with its pile of magic tissues. If true, then somewhere in a New Jersey landfill, the universe’s most provocative secrets lay rotting in the sun because of my overly mischievous dog.

One thought on “Annie and the Tissues”