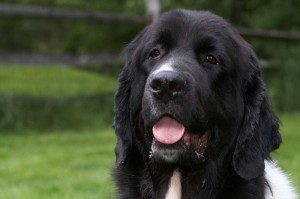 Annie hates the vacuum. She’s not like normal dogs, who dislike the sound of the vacuum. Oh no, our Annie couldn’t be so pedestrian. She isn’t even bothered by the sound of rolling thunder from the machine like so many other dogs. If you accidentally bump her with it while vacuuming, then she’ll leap up in surprise and go somewhere else, but that almost never happens. I suspect it almost never happens because I almost never vacuum, but that’s just a theory I’m working on. To date, there has been no conclusive evidence proving my involvement in Annie’s vacuum cleaner-related behaviors.

Annie seems to have a vendetta against all vacuums. When she was a puppy she chewed through the cord to the vacuum twice – once while it was plugged in! Except for the time it was plugged in, we never caught her in the act. You see, like any good psychopath, she only exhibits psychotic behavior when no one else is around. How do we know? As usual, we find the evidence that she was not clever enough to conceal.

Take, for example, Exhibit A. Exhibit A was found after a typical day when the she-beast was left home alone. Actually Guinness was here too, but he spends his days laying directly under his air conditioner in the laundry room. He also hasn’t chewed so much as a stick since we’ve had him, so we’re pretty sure that Annie was to blame. 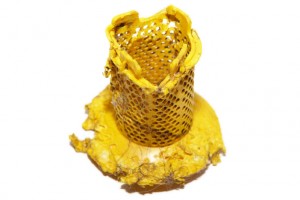 Exibit A is, or more accurately was, part of the ever important filtration system of our last vacuum. This part was responsible for catching clumps of dog hair and such, so we figure it was a key figure in preventing Annie from completing her plan. We’re not entirely sure what the full scope of her plan is, but we do know that it involves covering every item of clothing with strands of white dog hair. How she manages to plant only the white hairs is beyond me. Maybe the filter in the vacuum only worked on black hair. That would explain her desire to destroy the machine.

As usual with things Annie has destroyed, the root cause was entirely our fault. Upon clearing a clog of surprisingly black-only newf hair, Lauren pulled the yellow filter piece out and left it on her dresser. She left it there absent-mindedly as she tried to diagnose what would turn out to be a completely failed vacuum cleaner. That would be dead vacuum cleaner number 38 in our house for those keeping score at home. For those ready to suggest a brand or model, rest assured, we’ve tried them all. They all suck, just like my puns. 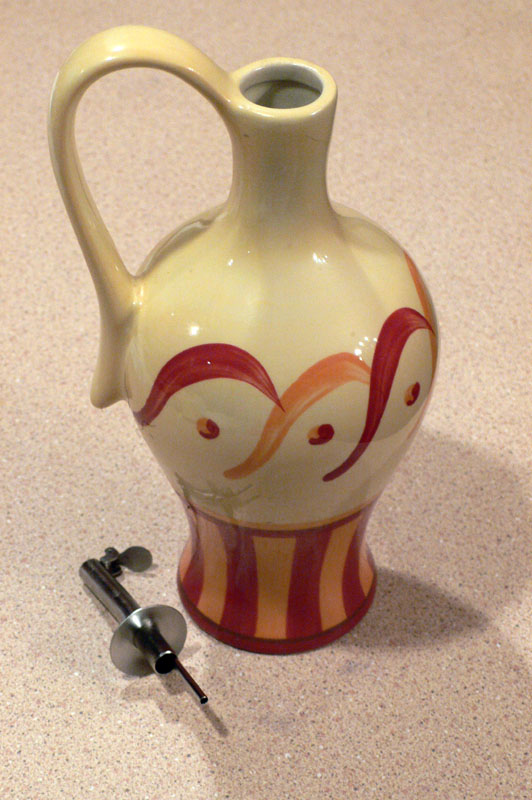 Now I should point out that the top of Lauren’s dresser, where said yellow filter piece was left, is not only four feet high, it is also completely congested with trinkets, jewelry boxes, perfume bottles and other assorted accouterments typically found on a woman’s dresser. While the yellow filter piece was carefully removed and destroyed, nothing else on the dresser was found to be out of place. Somehow, Annie managed to get up there, retrieve the piece, and disturb nothing else. Shades of the infamous oil decanter incident of 2009. I’m starting to think that our ferret-dog is moonlighting as a cat-burglar.

With vacuum cleaner #38 out of the picture, Annie no doubt assumed that her ongoing scheme could proceed as planned. It wouldn’t surprise me if phase two included the entire tri-state area. Annie is not a small-scale plan type of dog you see. Her plan, though, was foiled once more when Lauren brought home vacuum #39.

As with every new vacuum we buy, Lauren exclaimed at the magnificent power of the machine, and the ease at which it picked up ferret-dog fur. They’re all great machines before a few weeks of Newf hair ruins them. While Lauren vacuumed, Annie looked on with a frown, her brain whirring with schemes. Guinness remained in the laundry room, soothed by the mechanical hum of his beloved air conditioner. With the floors once again devoid of fur, all was well with the world. Or so we thought. 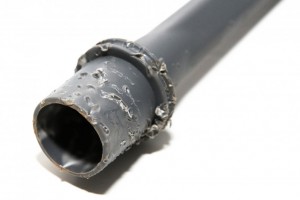 In the quiet of the night, Annie took action against the newest threat to her plan. Carefully removing key pieces from the new vacuum cleaner, she set to destroy them one by one. She removed the cool extension wand used to… oh who am I kidding? I don’t know what the Hell it’s used for. My guess would be to suck up spiders or to get pretzel crumbs up from between the couch cushions. It looks like a stick though, so I can see why a dog might sit and chew it for a spell upon finding it. I don’t think Annie thought her clever plan through though, because this part is really not a critical piece of the filtration system. Of course if she’s made a deal with the spiders in the house, then we’ve got a real problem brewing. 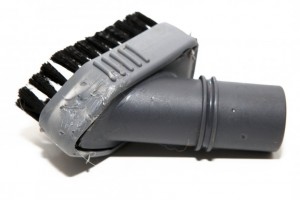 Next, she pulled off another piece and chewed on it for a bit. This piece is obviously used for brushing suede smoking jackets or for sucking the crumbs out of your hair, but to be fair, I haven’t really read the instructions. Annie hadn’t either, because this piece also had no critical role in the proper functioning of the vacuum. At least I assume it didn’t based on the fact that I still hear the vacuum running from time to time and I haven’t seen #40 show up.

Annie seems to have curtailed her vacuum cleaner destruction habits for the time being, which is good, because I’m tired of paying for vacuums. I mean it’s bad enough having dog hair clog and destroy vacuums, but having your vacuum eaten is really just too much. Seriously – who has these kinds of problems?

I think she’s figured out that we’re on to her diabolical plan. Either that or the spiders told her to stop. Either way, I don’t envision a happy ending. Actually, I can envision sucking the spiders up with the spider-wand vacuum attachment while sporting my freshly brushed suede smoking jacket. Yes, that ending would make me happy, so long as there are no crumbs in my hair.

2 thoughts on “Annie and the Vacuum”