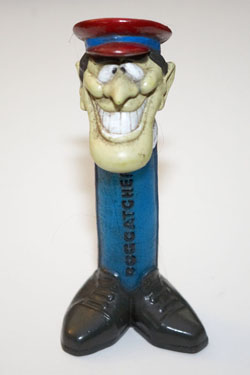 Annie is a destroyer of toys. She has been known to tear the heart out of stuffed toys, pull the squeaker out of rubber toys, and has even destroyed a soccer ball or two. Annie isn’t a keepsake-toy kind of dog like Cozy was. Cozy loved her Kong more than life itself, and we have hundreds of pictures to prove it. Annie has no special toy like that, but prefers to play with whatever is at hand – preferably something that she shouldn’t have.

There is one toy that she hasn’t destroyed, and her apparent respect for the toy fascinates me. The toy in question has been given the clever name of The Dog Catcher Man. Why? Because it’s shaped like a little man and has the word “Dogcatcher” on the front. I told you it was a clever name.

The Dog Catcher Man is a rubber squeaky toy like you’d find in any pet shop. It’s not a robust toy, and it is no way special except that it was purchased some thirteen years ago. Why do we have a 13 year old dog toy? This toy is special; this was Cozy’s toy.

When Cozy was a puppy we bought her a pile of toys like any first time puppy parents would. One of the toys in that first random pile was The Dog Catcher Man. For some reason Cozy, who was a fair destroyer of toys herself, never destroyed the Dog Catcher Man. Due to his size and shape, the Dog Catcher Man was used for learning take and drop it commands, though for the most part it was just a silly toy without any real significance.

At some point in Cozy’s life we took the Dog Catcher Man and put him on a bookshelf in the family room. If I had to venture a guess as to why, I’d say that Cozy was either driving me nuts with the squeaker, or it was left in the middle of the floor. Either way it was placed on the shelf and forgotten. As Cozy grew older, the only toy that mattered to her was her Kong, so the Dog Catcher Man sat on the sidelines and watched our lives unfold.

After Cozy died and the years passed, the Dog Catcher Man gathered dust on the shelf. No one bothered him as he sat in the back corner of the family room where DVDs and miscellaneous trinkets were kept. For years he held watch on the room where once he was chewed and squeaked with gusto by a beloved girl who was now long gone.

With Annie in the house, pandemonium returned as the order of the day. Once more the house was filled with all manner of puppy toys in an attempt to keep said puppy from causing trouble. They didn’t work, as countless words describing the carnage have attested. Still the Dog Catcher Man sat and watched, unremembered, unloved, and alone.

One day while rearranging the DVDs, I came across the Dog Catcher Man. Annie had been with us almost a year at this point, and my beloved Cozy had been gone almost five. Staring at the long-forgotten toy, I had the idea that Annie should have the Dog Catcher Man. Cozy’s Kong was safe in her  hand-made wooden box along with her ashes since that toy was sacred. The Dog Catcher Man though, he was more of a torch that needed to be passed.

Annie was a dog that I honestly had not wanted. She was an interloper – an intruder who would trounce over Cozy’s sacred memories. I had suffered greatly when Cozy died, and it had taken me years to feel like I might recover from her loss.  How could I entertain the idea of having another dog in our house—in Cozy’s house? The very idea of another dog replacing Cozy was paramount to desecration of her memory.

Of course Annie could never replace Cozy, and she didn’t want to. Annie wanted one simple thing: to be loved. Sure she wanted to be loved completely, constantly and annoyingly, but so long as you were loving her, all was well. I hadn’t wanted another dog, but Annie was the dog I needed. Annie, tremendously annoying ferret-dog that she was, demanded love. I couldn’t help but absentmindedly pet her, late at night while we watched movies together in the home theater room that Cozy and I had built together.

I decided that the Dog Catcher Man should be Annie’s. I grabbed him from the shelf, brought him upstairs, and quietly presented him to her. Annie walked up, sniffed him, then gently took him in her mouth. The look on her face seemed to say Really? Are you sure?

I was sure. Just like that, Annie had taken Cozy’s Dog Catcher Man. I hadn’t suddenly forgotten about Cozy, and the world hadn’t come to an end. I didn’t cry like a baby, and life went on. It was a powerfully important, yet amazingly unspectacular event.

Months later I look at the Dog Catcher Man and marvel at the fact that he has not been destroyed. He is still whole, though very dirty. For a thirteen year old rubber dog toy, I’d say that he has fared pretty well—better than me in fact.

I think that I might take the Dog Catcher Man soon and put him back on the shelf. I worry that he might eventually get destroyed, but I wonder if somehow Annie knows that he’s special. He signifies Annie’s acceptance into our hearts, and I think she knows that, even if she is a ferret-dog pain in the ass.

6 thoughts on “Annie and the Dog Catcher Man”