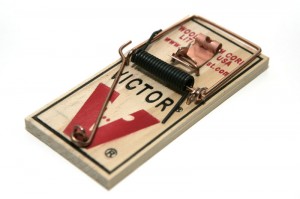 Here in the woods of New Jersey, when the leaves start to fall and the temperature drops, we all tend to spend more time indoors. And by “we”, I mean family, dogs, and the filthy vermin commonly known as mice.

Our rodent problem is not a unique one. Go to any hardware store around here in October, and you’ll see the mousetrap section picked over like the dairy aisle in a supermarket before a hurricane.

I tend to be a “live and let live” kind of guy. In the past I’ve used live traps so that I could release the gentle creatures into the wild where they might frolic and play. Those days are gone I’m afraid—now I kill ’em dead. I felt bad while disposing of the first thirty or so. After fifteen years of battle, I now have the blackened soul of a cold-hearted executioner. My wife though, she’s the scary one.

In an effort to ensure a humane end to our furry little guests, we invested in an electric-shock trap called the Rat Zapper. My wife’s disturbing serial-killer laugh after the bzzzzzt of each lethal shock haunts me to this day. Sure the trap is efficient, clean and humane, but listening to the way my innocent bride enjoyed the sound of cooking mice was too much for me to bear. It was too easy to imagine her standing over me with a cleaver while she laughed like that. I reverted to the good old-fashioned mouse traps in order to stop the nightmares.

As any seasoned mouse-hunter will tell you, the bait of choice is either gum drops or peanut butter. Anything that sticks to the trigger, while being tasty and aromatic enough to attract the critters will do.  Peanut butter is cheap, plentiful, biodegradable, and non-toxic. The yummy stuff really has only one downside as a bait, though it never occurred to me in the fifteen years I’ve been a home owner. Peanut butter is apparently too tasty not to lick. 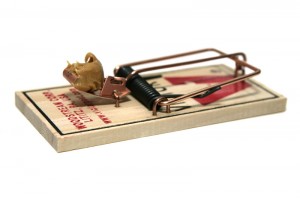 Imagine for a moment that you’re a teenage Landseer Newfoundland who’s always hungry. Imagine your surprise when you walk into the alpha man’s cave and find the delicious aroma of peanut butter wafting up from the floor. I mean, what would you do if you were suddenly presented with free peanut butter in such a situation?

As much as I’d love to describe how Annie ran through the house with a mousetrap on her tongue while we all tried to catch her, it just didn’t happen that way. Luckily, the mousetrap was facing the wall, so when she stuck her tongue in where it didn’t belong, the trap triggered, popping up in the air and scaring her half to death. I’ll admit that I am both grateful and disappointed that the trap didn’t catch her. Yes, I’m a bad person for wishing my Annie harm, but damn that would have been the story of a lifetime. We black-hearted executioner types can have a dark sense of humor.

Really though, what strikes me more funny than the event itself, is the way that Annie now gives the mousetrap a wide berth. Now, when she walks into the office, she glances over at the evil, yet sweet-smelling contraption. Then, while continuing in to the room, she presses herself against the wall in an effort to stay as far away as possible. I can see her conflict, and so help me, it’s hilarious.

Even when Annie has settled in the office, she nervously glances over at the mousetrap, expecting it to snap at any moment. She has no idea that she triggered it. She does know to stay away from them now, even if she doesn’t know why. Maybe I should put one near the butter.

3 thoughts on “Annie and the Mousetrap”